Akehoshi Karin (明星かりん, Akehoshi Karin?) is a minor character who appears in Go! Princess Pretty Cure. She is a dreamer who aspires to become a model like Amanogawa Kirara after finding magazines featuring her. Feeling like she isn't good at anything, she became Kirara's temporary assistant to earn more experience.

Karin has light skin and slanted purple eyes with thick lashes. She has dark plum hair worn in a short bob.  Casually, Karin wears a pink long-sleeved top with a cat head drawn at the middle and grey collar, worn with a yellow and white diagonal striped skirt with white suspender straps. Her magenta shoes have ankle straps and are worn with white socks.

An average girl, Karin didn't have any aspirations or future goals until she came across Kirara in a magazine. She quickly decided to become a model and admires her, but lacked the confidence to develop her personal style. Kirara has said that Karin reminds her of herself when she was younger.

One day Karin entered a store and found magazines featuring Kirara, leading to her requesting an assistance job to Kirara in order to gain more experience. She helped her get ready for Japan's Collection before seeing Kirara off at the airport with Haruka and the others. However, Karin becomes a target of Stop & Freeze and transformed into a fashion model Zetsuborg, which causes Kirara to abandon her dream to save her. However, after freeing Karin, Kirara was shown to heavily regret her decision and forced herself to abandon her dream to focus on her duty as Cure Twinkle. Karin attempted to remind her of how good of a model she is with the others after seeing how unhappy she is, and she takes part in the fashion show of dreams. During her presentation, she reminds Kirara of a younger version of herself, and she soon comes to realize that she wants to continue her dream. 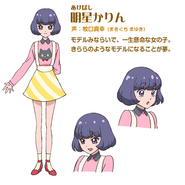 Karin being held by Cure Twinkle

Karin looking at Kirara in episode 43

Karin crying because of how amazing Kirara is

Karin checking out her hair in the mirror