Bunbee (ブンビー, Bunbī?) is the boss of Girinma, Gamao and Arachnea in Yes! Pretty Cure 5. He transforms into a bee. For the first part of the series he was believed to be leading Nightmare, but it is soon revealed that he takes orders from Kawarino.

He joined Eternal in the sequel after surviving a fatal fall near the end of the last series.

In his human form, his normal attire consists of a dark gray suit, red shirt, and olive-colored tie. However, in GoGo!, he wears a white jacket with the same red shirt and tie underneath it. His true form is that of a muscular humanoid bee.

He initially seems menacing and demanding, but develops into a comic relief villain as his position in the company is overthrown. He fears Kawarino and always tries to find a way to be promoted so he can be the man in charge.

In GoGo!, Bunbee is depressed due to his position as a lowly underling and is constantly nervous. He gradually regains his confidence and ultimately finds his life goal of opening his own company.

Bunbee first appears in episode 2, where he scolds Girinma for not obtaining the Dream Collet. After all three of his subordinates failed, he took matters into his own hands, arriving at Minazuki Karen's mansion to attack the four Pretty CureYPC505. He fails to defeat them but does seize a Pinky, though he loses it during his next attack when he transforms the Pinky into a Kowaina monster.

After multiple failures at defeating Pretty Cure 5, Bunbee flees because of the black Kowaina mask. On Nightmare HQ's roof, Kawarino blasts him off, but Bunbee miraculously managed to grab the edge of a window as he fell after remembering he could fly and escaped.

In GoGo!, Bunbee finds a new job at Eternal but ends up being looked down on by every member and is usually seen bringing tea to them.

He finds Pretty Cure as an Eternal member by tricking Mailpo to lead him to the girls. When the girls recognize him, they wonder why he returned since Nightmare was defeated. Bunbee explains what happened and how he survivedYPC5GG03.

Bunbee meets Scorp but continually mispronounces his name but they eventually become friends. The pair even teamed up and almost seized the Rose Pact before Milky Rose debuted and ruined their plansYPC5GG10. He was very disheartened when Scorp died and all the other members of Eternal didn't seem to care. Bunbee did not get along with Nebatakos at all, as he insulted Bunbee and then forced him to massage his legsYPC5GG12.

Bunbee grows more dissatisfied with his position within Eternal, complaining about having to study the value of the "weird" items in the collection and wonders how he ended up working at Eternal. Things eventually get so bad that out of despair and desperation, Bunbee approaches Pretty Cure and asks to become their leader but is denied due to his harsh methodsYPC5GG35.

As Bunbee is reporting to Anacondy about King Mont Blanc, she attempts to get rid of him with hidden trap doors in the floor that sucked him in. Anacondy leaves when she thinks he is gone, but once again Bunbee has managed to grab hold of one of the doors so he can open them up. He considers getting a new job again.YPC5GG39

In the final few episodes, Bunbee watches how the Boss kill Mucardia before hiding in the collection until the Boss brings the Pretty Cure and Milky Rose to Eternal with Anacondy. From a window, Bunbee watches as the Pretty Cure were turned to stone and then teleported into Boss's collection. He then proceeds to witness the death of Anacondy and Boss flying to the Cure Rose Garden. Bunbee then finds Milky Rose, Syrup, and Mailpo so he can show them the secret entrance to the collection where they were able to return the Pretty Cure to normal. Cure Dream thanks him but he tells her to hurry up and go to the Cure Rose Garden.

In the final episode after the Boss's defeat, he is seen with his own business called Bunbee Company with a staff who looked a lot like Kawarino working for him.

In the GoGo's movie, Bunbee briefly served Mushiban by robbing Nozomi's birthday cake, and led the Cures into a trap Mushiban had set inside Sweets Kingdom. But he soon quit after feeling disappointed when he saw what Mushiban's reward was for him.

Bunbee appeared in the 36th episode of HUGtto! Pretty Cure, where he encountered Saaya, Hana and the KiraKira Cures as they were looking for the other Pretty Cure. After being treated by Ichika and Ciel at the KiraPati, Bunbee revealed that he had been working for Criasu for a very short time. He also helps them find the Pretty Cure 5 team. 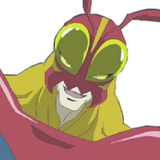 Bunbee in his Business suit

Bunbee is shocked to see 5 Cures in YPC506

Bunbee wants to be the Pretty Cure leader

Bunbee cheering on the Cures