Candy is a sheep-like fairy, one of two main mascots in Smile Pretty Cure!. She, alongside Pop, came to Earth in search of Pretty Cure to help them in collecting the Cure Decor, in order to defend the peace in Märchenland. She loves fashion. Candy ends her sentences with "kuru~" and usually refers to herself in third-person.

Candy has pale pink (almost white) fur, with two curly yellow pigtail-like ears held with pink bows. Her eyes are dark blue, with yellow markings in the shape of wings near her eyes. She has pink and yellow heart-shaped markings on her forehead as well. Her arms and legs are stubby, and she has a frilled pink collar around her neck. Her tail is yellow and curly, like her ears.

Personality wise, Candy is very girly and is very fond of fashionable stuff. She also likes to dress herself up and style her ears in different fashions. She can be also a bit strict about Miyuki and the girl's status as Pretty Cures. She can be a Crybaby, a bit childish and can get easily scared when saddened. Candy also acts like a little sister when Pop is around. She doesn't know the human world very well so Miyuki explains the customs. When she has trouble or worries, like not being any help for the Pretty Cures, she asks for advice from Reika.

Coming Down to Earth

Candy came down to Earth from Märchenland to search for the legendary warriors, Pretty Cure, after her world was invaded by the evil emperor Pierrot, who had sealed away the Queen. In order for the Queen to be revived, Candy has to gather all of the tokens of Happiness, the Cure Decor.

Having arrived in the human world through a storybook, Candy encounters Hoshizora Miyuki who shortly becomes Cure Happy after their first meeting. Miyuki then promises to Candy that she'll help gather Cure Decor and save her world.

In the final episodes, Candy is turned into the miracle jewel, which is a sign that she will be the new ruler of Märchenland, Royal Candy .

During Episode 8, Miyuki and Candy accidentally switched bodies due to Majorina's rings. Because of this, Candy (in Miyuki's body) could not transform into Cure Happy because she was not the actual Cure. However, Miyuki (in Candy's body) was able to transform, not into Cure Happy, but into a parody named Cure Candy.

Cure Candy's outfit looks exactly like Happy's, and they share a similar transformation sequence. However, Cure Candy has her own introductory phrase and alter ego name. Also, Cure Candy carries the Smile Pact on her back, much like a backpack, instead of having it attached at her right hip.

Like Happy, Cure Candy is able to perform purification attack Happy Shower, though she uses her ears to draw the heart instead of her hands.

In Episode 12, Candy was shown to be essential in allowing the Cures to achieve Tiara Mode. Due to her strong wish to become the Cures' power, she managed to produce the 5 Miracle Jewel Decors needed for the power-up.

Hoshizora Miyuki - Miyuki is the first Cure whom Candy meets, and she stays with her and follows her to school. Candy is often frustrated by Miyuki's overenthusiasm and carelessness, plainly telling Miyuki that she worries about her and that she hopes Miyuki will find the other Cures to help her out soon. Despite worries for Miyuki for her carelessness, Miyuki always look out for her and always worried about her when she gets lost. Miyuki and Candy have great terms on each other because of their "High Happiness". Miyuki sometimes introduces and explains costums of the human world.

Pop - Pop is Candy's older brother. Both she and Pop were assigned to find the Pretty Cures on Earth. Candy loves her brother and when he visits, she would always jump out and embrace him. Pop is a responsible older brother to Candy, and always looks out for her. In turn, Candy depends on him a lot and is extremely attached to him. Pop loves his little sister and knows her very well.

Candy - Candy is a type of sweet made from sugar and flavorings, which is sold to children. 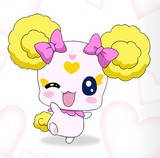 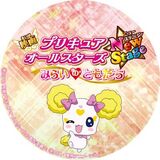 Movie Exclusive sticker.
Add a photo to this gallery

Candy with her ears down.

Candy (and her brother Pop) with turban style.

Candy as a maiko.

Candy at the beach

Candy in her new form

Candy in her new form

Royal Candy fighting
Add a photo to this gallery 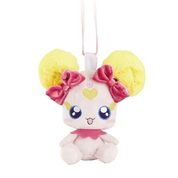 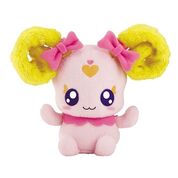 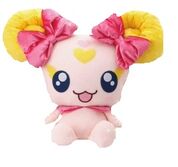 Candy plush 3.
Add a photo to this gallery

Retrieved from "https://prettycure.fandom.com/wiki/Candy?oldid=59487"
Community content is available under CC-BY-SA unless otherwise noted.