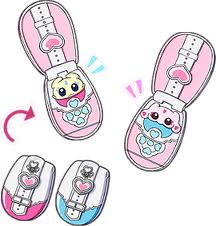 Card Communes (カードコミューン, Kādo Komyūn?) are the main transformation items used by the girls in Futari wa Pretty Cure and the forms Mepple and Mipple take on to disguise themselves while at the Garden of Rainbows. It also helps them store energy, as being in their normal forms too long causes them to run out of it as they are not used to the atmosphere.

At the start of the second season, Futari wa Pretty Cure Max Heart, Mepple and Mipple are briefly seen in their Card Commune forms, before permanently switching to the new Heartful Commune forms.

The Card Commune is based on a cellphone or makeup compact. The outside is white with coloring of pink or blue on the bottom and a buckled strap at the middle, held by a small pink gem heart that has the Pretty Cure Insignia above it.

The inside of the commune is pale pink with the strap from the outside on the top half. The lower half has a white section where Mepple or Mipple rests in a pink or blue colored window to match the coloring outside. Beneath the window are five pale blue buttons, four of which are shaped like a heart and point towards the center.

When worn on the Cures, they are in a white pouch that has pale blue straps over it and a hot pink back and flap.

The Cards Communes can be used by the Nagisa and Honoka to transform whenever they slash the card through the slot, usually kept in a small pouch on their waist. The communes are used with Pretty Cure Cards, these cards are slashed through the slit at the bottom to activate their function. This is used for transformation or for summoning a fairy to take care of Mepple and Mipple.

Mepple's version of the Card Commune

Closeup of Card Commune Mepple
Add a photo to this gallery
Retrieved from "https://prettycure.fandom.com/wiki/Card_Communes?oldid=442083"
Community content is available under CC-BY-SA unless otherwise noted.