Criasu Corporation (クライアス社, Kuraiasu-sha?) is an evil company and the main villains in HUGtto! Pretty Cure. Their goal is to acquire all the Mirai Crystals and extinguish the world's future by freezing time so everyone can have "eternal happiness," according to George Kurai.

Although they have many more employees, most of the season's villains are from the Azababu branch office.

This section lacks content or has faulty grammar and information. Hummy says you can help by editing this stub.

It is not known when the company was founded. The Azababu branch office was established in 2018.

The Criasu Corporation was responsible for taking away Hugtan & Harry's world's future. It was thanks to the White Mirai Crystal that the two escaped. The company is pursuing them to acquire the Crystal.

It was disestablished as of episode 48 when George Kurai was defeated, with its employees being purified by the Cures throughout the season.

As revealed in the new future in episode 49, by going back in time to save her own future, Hugtan prevented Hagukumi City’s time from being stopped along with Criasu Corporation's existence in the original timeline from ever happening to begin with.

A view up the Azababu branch office 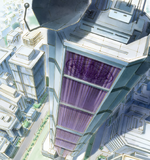 Another view, showing the office's surroundings

The same view at night

Most employees leave at night

Listol submits a proposal for approval

The president spits out a stamp

A proposal is approved

The president's glowing eyes show when an Oshimaida is summoned

The Azababu branch office is destroyed
Community content is available under CC-BY-SA unless otherwise noted.
Advertisement