Tosugi Natsuko
The Fourth Pretty Cure!? Amane's Choice (４人目のプリキュア！？あまねの選択, Yonin Me no Purikyua!? Amane no Sentaku?) is the 17th episode of Delicious Party♡Pretty Cure and is the 890th episode of the Pretty Cure franchise overall.

Yui and the others finally reunite with Amane at school. There, they learn that Amane has decided to quit being the student council president. Meanwhile, something is born in CooKingdom!? 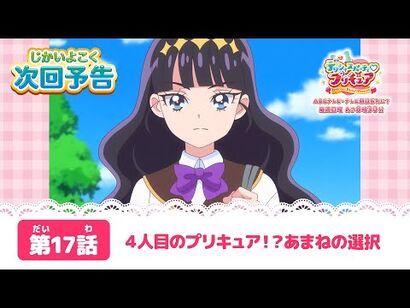