Mana is Getting Married!!? The Dress of Hope that Connects to the Future

Doki Doki! Pretty Cure The Movie: Mana is Getting Married!!? The Dress of Hope that Connects to the Future

One day, Aida Mana received a wedding dress from her mother and grandmother that they had worn in the past. While thinking about who she would wear this besides someday herself, a mysterious man named Marsh appears, and Mana is thrown back into the past. She was happy to see her grandmother she loved and her old dog Maro, but she then realizes that Alice, Rikka and Makoto are not there because their memories have been altered. In order to save precious memories, the future, dreams, and hope, Mana transforms into Cure Heart.

One day, Mana receives a wedding dress from her mother, which was previously worn by her late grandmother and her mother. Later, whilst discussing their elementary school days with Alice, Rikka, and Makoto, Mana recalls owning a dog named Mallow, who died when she was little. That night, a mysterious man named Marsh uses a clarinet to call forth forgotten and discarded objects that still feel they have use, combining together into a giant whale-shaped blimp in the sky. Marsh, who Mana doesn't seem to recognise, starts trapping people inside film reels, forcing them to relive their past memories for eternity, depriving them of their futures. He then summons three henchmen; Purple Buggy, Silver Clock, and Mannequin Carmine, to fight against the Cures, reassembling them no matter how many times they are destroyed. Overwhelming the Cures, Marsh traps them inside their own memories, with Mana finding herself in her elementary school days when both her grandmother and Maro were still alive. Meanwhile, Sharuru and the other fairies are approached by Bebel, a former acquaintance of Marsh, who informs them that they must venture inside the memories of their partners in order to save them. As Mana tries to find a way back to the real world, she finds the memories in this world are different from her own, as Rikka and Alice are nowhere to be found, but seems to enjoy being with Mallow. With help from Bebel, Sharuru and the others dive into their partners's memories, with Sharuru joining Mana just before she learns Mallow was hit by a car, which ends her film reels when she gives into the grief of losing her beloved dog. Cautious about Bebel's words that Mana will never give up, Matthew sends his henchmen after Rikka, Alice, and Makoto, deeming them a threat. Rikka and Alice manage to find each other within their memories, soon joined by their partners, whilst Davi convinces Makoto not to run away from the reality of the Trump Kingdom's situation. Rikka and Alice fight off against their opponents whilst Makoto is assisted by the arrival of Aguri, Cure Ace. Meanwhile, Mana, who can't stand returning to a world without Mallow, receives words of encouragement from her grandmother, allowing her to hear the support of her friends and find a way back to her world along with the others. As Marsh transforms into his true form, Mana, realising that Marsh is actually Mallow himself, takes on his attack, stating she has never once forgotten him, helping him to see the light. Just then, the clarinet that had been influencing Mallow travels forward in time to try and destroy the Cures's future. Using the Miracle Bouquet Lights, the Cures travel forward in time to the day of Mana's wedding and, with help from Mallow, reach the clarinet, who proves resilient to the Cures attacks and delivers a critical blow to Mallow. Being left with no regrets, Mallow leaves behind his psyche, which gives Mana the powerful Engage Mode, allowing her to defeat the clarinet. After the girls return to the present and everyone who was imprisoned is freed, Bebel takes care of Maro's psyche, revealing herself to be Mana's grandmother. Mana then asked her if she will ever see Mallow again. 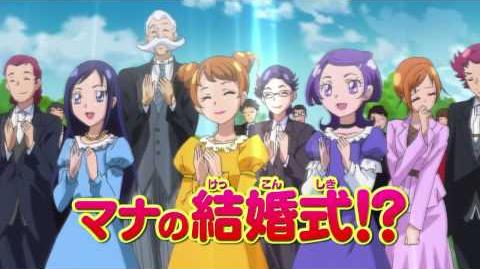