Template:SeriesInfo Fresh Pretty Cure is the sixth season and fourth incarnation of the Pretty Cure series by Toei Animation, premiering on February 1, 2009. The series initially focuses on three Cures, Momozono Love, Aono Miki and Yamabuki Inori, who transform into Cure Peach, Cure Berry, and Cure Pine, respectively. Their mission is to defend this world and the parallel worlds from Labyrinth. Midway through the season, a fourth Cure is introduced: Higashi Setsuna, who transforms into Cure Passion. The season's motifs include fruits, clovers, card suits, dancing and happiness.

The Cures of Fresh! receive a special upgrade during the series, known as their "Cure Angel" form.

Momozono Love (桃園 ラブ, Momozono Rabu?)The cheerful and selfless girl who is the unofficial leader of Pretty Cure. She is liked by everyone in town, and hates to see others suffering, even if they are her enemy. Her alter ego is Cure Peach, representing the power of love through the symbol of the Heart.

Aono Miki (蒼乃 美希, Aono Miki?)
The elegant young woman who is talented in several fields and dreams of becoming a model, though Pretty Cure and her friends always come first for her. Her alter ego is Cure Berry, representing the power of hope through the symbol of the Spade.

Yamabuki Inori ((山吹 祈里, Yamabuki Inori?)
A shy girl who loves nature and animals, and aspires to become a veterinarian just like her parents. Her alter ego is Cure Pine, representing the power of faith through the symbol of the Diamond.

After having fought the other three girls for a long time as Eas, Setsuna eventually joins them when she is revealed to be the missing fourth Cure, Cure Passion, representing the power of happiness.

Eas (イース, Iisu?)
The only female of Labyrinth during the first half of the series. She has an obsession with defeating Pretty Cure in order to get Moebius to pay attention to her. Her human alias is Higashi Setsuna.

Westar (ウェスター, Uesutaa?)
The more clumsy member of Labyrinth, who is more of a comic relief despite his tough appearance. He never learns about a thing before attacking the people. His human alias is Nishi Hayato.

Soular (サウラー, Sauraa?)
The quieter member of the group, who prefers planning before actions. He seems to care for no one and enjoys when people suffer. He often plans out his attacks before going on a mission, always knowing beforehand what to do. His human alias is Minami Shun.

Northa (ノーザ, Nooza?)
The fourth member who appears late in the series, though she was shown with her face hidden in the second opening before her official introduction. She is an elite within Labyrinth, and uses Sorewatase as monsters and in battle can manipulate plants. Her human alias is Kita Nayuta, but has never officially used it.

Nakewameke (ナケワメーケ, Nakewameeke?)
The monsters used most often by the villains. They are made using a diamond imbued with evil energy that can be created by Eas, Westar and Soular using magic, which is then used to possess both animate and inanimate objects to do the bidding of whoever summons them.

Nakisakebe (ナキサケーベ, Nakisakeebe?)
The new kind of monster that Moebius presented to Eas after she asked for more time to defeat Pretty Cure. Although it is incredibly strong compared to Nakewamekes, it works by sapping energy from the user and causing him or her pain. Eas was given only four cards to summon Nakisakebes, and those four are the only ones that appeared in the series.

Sorewatase (ソレワターセ, Sorewataase?)
The third monster used by the villains, stored within a fruit with a vaguely humanoid shape that is grown by Northa using the liquified Fuko Energy stored in the Fuko Gauge. It was introduced by Northa, and only she can use them fully. They are also used by Westar and Soular a few times.

Moebius (メビウス, Mebiusu?)
The leader of Labyrinth who wishes to rule all worlds, thinking of all his subjects to be only mindless pawns.

Tarte (タルト, Taruto?)
A ferret-like fairy of the Kingdom of Sweets, he is Chiffon's caretaker and speaks in Kansai dialect. He takes Chiffon to the human world on his search for Pretty Cure. He is prone to worrying and often grumbles, but becomes weak to a good story and will become overly emotional. He also loves Kaoru's donuts.

Chiffon (シフォン, Shifon?)
A baby fairy from the Kingdom of Sweets. Chiffon likes to play practical jokes on others, often by using her esper powers. The mark on Chiffon's forehead gives a light that has many different abilities, including bestowing Pretty Cure with the ability to transform and giving them some of their power ups.

Elder Tiramisu (長老ティラミス, Chourou Tiramisu?)
The owl-like elder of the Kingdom of Sweets, he is the one who summons the Pickruns to look for Pretty Cure.

Waffle (ワッフル, Wafuru?)
Waffle is Tarte's father and king of the Kingdom of Sweets.

Azukina (アズキーナ, Azukiina?)
Tarte's fiancee who loves him very much and supports him in whatever he is doing. She is also a fairy, but strongly resembles a chipmunk with pink fur.

Kaoru (カオルちゃん, Kaoru-chan?)
Kaoru sells donuts in a park and plays the consultant role for Pretty Cure when they are feeling down. Owing to a contract that Tart can get donuts for free by entertaining solicitation, he also shares the secret of the existence of Tart and Chiffon.

Chinen Miyuki (ミユキ , Miyuki?)
Miyuki is the leader of the famous dance unit Trinity and Pretty Cure's dance group, Clover's, coach. Although strict and hard-driving, Love absolutely admires her. She is later admitted into the secret life of her students.

Chinen Daisuke (知念大輔, Chinen Daisuke?)
Miyuki's younger brother and is one of Love's classmates. He likes Love and often tries to impress her throughout the series but sometimes ends up in a friendly fight with her.

Sawa Yuki (沢 裕喜, Sawa Yuki?)
Another of Love's classmates who has a huge crush on Miki, though he thinks Cure Berry looks nice, too.

Mikoshiba Kento (御子柴 健人, Mikoshiba Kento?)
Love's classmate and the heir to Mikoshiba Zaibatsu. He has a tall figure, a gentle appearance, wears glasses, and is very timid.

Ichijo Kazuki (一条 和希, Ichijo Kazuki?)
Kazuki is Miki's 13-year-old younger brother who lives separate from Miki with their father ever since their parents divorced, and he attends the same school as Miki. Miki often exploits him to go out with her and pose as her boyfriend to keep away other boys. He has had low blood pressure since birth, which has given him low confidence. Despite that, he aspires to become a doctor one day.

Momozono Ayumi (桃園 あゆみ, Momozono Ayumi?)
Love's mother, who loves her family very much and is gentle and understanding to everyone. She was the champion in the beauty contest of Yotsuba Town once.

Yamabuki Tadashi (山吹 正, Yamabuki Tadashi?)
Inori's father, the local veterinarian, owns a personal clinic in Yotsuba Town. He has a bold, generous appearance and is very knowledgeable about animals, a quality that Inori admires greatly.

Reika & Nana (レイカとナナ, Reika & Nana?)
The two other members of Trinity besides Miyuki. When performing, they wear black visors over their eyes.

-The girls transform with items called Linkruns. The Pickruns (of each respective Cure) entered the girls cellphone and it became a Linkrun, which they use to transform.

-Peach, Berry, and Pine have weapons called Cure Sticks. Each have their own attack name and a different headpiece for the wands (ie: Peach has a heart).

-Passion fights with the Passion Harp; she is the only Cure in this season to have a different weapon. 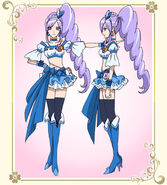 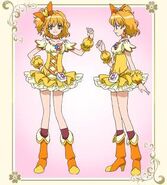 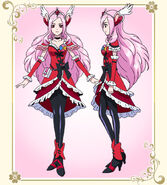 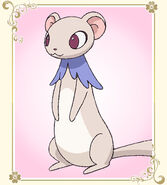 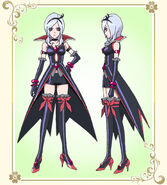 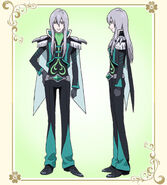 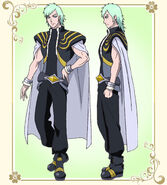 Add a photo to this gallery

All Cures in their Angel forms 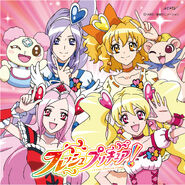 Add a photo to this gallery

Retrieved from "https://prettycure.fandom.com/wiki/Fresh_Pretty_Cure!?oldid=68166"
Community content is available under CC-BY-SA unless otherwise noted.