In the morning, Saki oversleeps and is late for her meeting with Mai. While Mai was waiting, she entered a nearby clock shop, where an old man was winding an old clock. When Saki came to the meeting place, Mai wasn't there, and she panicked. Then Saki entered the store, and saw Mai. The girls hurried over various shortcuts, when a man asked them about the oldest clock in own. They told him about that old clock at the store before continuing on their way.

Unfortunately, they have missed the registration. They begged for the registration guys to let them in, and they made an exception. Kenta came, trying to cheer them on, but they are too stubborn. Then the contest starts, and the host announces two famous singers, Mukai Aki and Uchiyae Yuka, as judges. When their turn comes, Saki and Mai are prepared to sing Ganbalance de Dance (Saki & Mai ver), but they are too nervous. Together they wish that time would stop, and it surprisingly does. Saki and Mai are the only ones who could move, besides Flappy, Choppy, Moop, and Foop. Saki announces that she wanted to grab some sweets, and Mai scolds her, with Saki replying that she was just kidding. Suddenly, two strange fairies land in front of them and hurried into the clock shop Mai had been in earlier. The old clock is shining, and the two mascots enter the lock. Saki and Mai follow and are sucked into the clock as well.

The girls exit in an orange ball and wonder where are they in. The fairies from before inform that they were in the Land of Clocks and wonder who they are. When the taller fairy notices Flappy, Choppy, Moop, and Foop, he assures that everything is alright. The fairies tell the girls that time has stopped and they have to return the clock spirits to the Infinite Clock to restore time. There is still some time left though, so they could move. They introduce themselves as Hours, the short hand, and Minutes, the long hand.

Then the man from before arrives, and Choppy feels a very dark presence from him. The man introduces himself as Sirloin, the perfect warrior from Dark Fall. He is surprised that Saki and Mai have heard about them, before realizing that they are Pretty Cure. He thanks Saki and Mai for telling him about the clock, which is the entrance to the Land of Clocks. Saki and Mai begin to fight, and Hours and Minutes asks him to return the clock spirits or else time would be stopped. Sirloin tells the girls that he wants a world to himself and reminds them about their earlier wishes. In response, Saki and Mai transform into Cure Bloom and Cure Egret, and battle Sirloin. However, they are quickly defeated. Hours and Minutes began beating his leg, demanding Sirloin to give back the Clock Spirits. Sirloin refuses and opens his briefcase. A purple mass comes from the case that sucks them all into a giant maze. Sirloin tells them that the maze is endless without an exit. Bloom replies by telling him that there is an exit where there is an entrance. Suddenly, the Cures realize that they have been separated from Moop and Foop. Meanwhile, Moop and Foop are wandering when they meet the Clock Spirits who do not know where to find the exit.

Bloom and Egret are wandering around as well. They entered a strange desert filled with clocks. Bloom and Egret began to fight again. This was because Egret wanted to keep looking for an exit, and Bloom wished to find Moop and Foop. Bloom and Egret get separated, leaving Hours and Minutes behind. Suddenly, an Uzaina approaches Egret, and Bloom hears her screaming. She hurries but Egret wasn't there. Instead she is trapped in one of the clocks with the door being shut. Egret tries knocking, but it disappears and she falls.

Meanwhile, the Uzaina has left, and Hours is with a fainted Bloom outside. Bloom wakes up and is hurt. Flappy tells Bloom that she can't use her full power unless she is together with Egret. Hours assumes that Egret must be with Minutes. Flappy can't feel any presences nearby, and Bloom believes that Egret she maybe defeated, which everyone opposes. Bloom blames herself for what she has said, and suddenly reverts back to Saki. Same with Egret, who is with Minutes, when she worries about Bloom, and changes back to Mai. Something is wrong with their first memory, because both remembered each other as little girls meeting themselves as teenagers, but their child selves run away from their teenage selves.

Saki is sitting, thinking she's alone and can't do anything. Then Hours tells her that sitting here won't solve anything. He is worried about Minutes, because he likes to wander off to danger without him around. When being asked by Hours on whether she worries about Mai, she admits it, so Hours advises her to go and help her friend if something happens because this is what it means to be a friend. He also admits that he's concerned about Minutes.

Mai also was thinking alone. She said, that she's worried about the future. She believes that everything's going to be fine as long as she paints, but she realized that it won't be enough, because the future has tons of possibilities, and Saki was the one that has helped learn her that. Minutes asks why isn't she looking for Saki, and is certain both Saki and Hours are fine. Mai is uncertain whether Saki might hate her or not, but Minutes says that it is more important on how she thinks of Saki, not the opposite. All he does is make Hours angry but they still care for each other. He asks is it fine if she'll never see Saki again, and Mai remembers all the times she has with Saki. Saki also remembers the same. Hours decides to go look for Minutes alone, while Saki asks Flappy whether it is possible for her to be Mai's partner again, which Flappy reassures her. Then Saki stands up, grabs Flappy and Hours, and then shouts for Mai as loud as she can. Meanwhile, Mai along with Choppy and Minutes is searching for Saki when she hears Saki's voice. Minutes believes that the reason she is able to hear Saki is due to them being partners, so Mai shouts the same. The two girls hope to catch each other's hands, but they almost fall until Moop, Foop and Clock Spirits catch them.

Another Uzaina chases them when its "hair" falls off, revealing to be just a wig. But behind that wig on its head is the exit. When the Uzaina attacks, Saki leaps onto its head, handling to one of the door rings, though the door doesn't open. Then Mai aids Saki and together they open the door, causing the Uzaina to disappear. Everyone is now back in the Land of Clocks near the Infinite Clock with Sirloin, and the residents from Infinite Clock enter it and turn the hourglass. Sirloin tries stopping them, but Flappy and Choppy, and later Moop with Foop, restrains his hand to prevent from attacking. Then he surrounds Saki and Mai, together with Flappy and Choppy, who turn to their commune forms, and Moop with Foop, who are in Saki and Mai's hands. Saki and Mai join hands and apologize to each other, and their suits changed to Bright and Windy's, just un-bloomed. The girls admit that they were really scared before while their skirts bloom, and they know that they might just be a burden to each other but they still want to be together. While they confess to each other, Moop with Foop's power gave them Spiral Ring Set, and they fully transform, breaking through Sirloin's sand pile.

Sirloin starts attacking them like he did before, but this time the Cures are in harmony because they aren't fighting. They throw Sirloin away, but he turns into a monster. He asks why aren't they giving up, and they tells him firmly that they will never give up; their powers as individuals may be small but if they join hands together, a greater power can be born. Sirloin dismisses them, but Windy argues that the future where everyone is all alone is boring, as there will be no one to trust, which is their motivation of not giving up and build a future with everyone. They used Spiral Star Splash, together with the power of the Infinite Clock spirits. Sirloin uses his attack against Spiral Star Splash, claiming that he's the strongest, but Bright agrees with Windy that they're not perfect and this is why they need to be together and form a miraculous power. From the Infinite Clock, the 12 Zodiacs offer their power to Pretty Cure, resulting in Sirloin's defeat.

After that, the Clock Spirits, as well as Hours and Minutes, return to the Infinite Clock. People at the Land of Greenery start moving again. Saki and Mai are now back at their karaoke performance stage, and the music has been turned off. The host turns it on again, and Saki and Mai start singing Ganbalance de Dance as the ending song of the movie.

Saki in the movie

Mai in the movie

Dual Spiritual Power in the movie

Cure Bloom in the movie

Cure Egret in the movie

Cure Bright and Cure Windy in the movie

Minutes in the movie

Hours in the movie

Sirloin in the movie 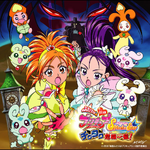 Cover for the manga version