Girinma (ギリンマ, Girinma?) is the first of the villains to appear in Yes! Pretty Cure 5.

Girinma first appears in episode 1 when he attacks Coco and Nozomi in the library and demands the Dream Collet from Coco. He summons a Kowaina monster from a picture in the library, but his Kowaina ends up being defeated by newly awakened Cure Dream's Dream Attack. With his Kowaina destroyed, he retreats.

He makes several other appearances after, with most of them being him scolded by Bunbee. After failing to defeat the Cures many times,Kawarino gives him a black paper and tells him that it will give him enough power to defeat the Cures. Girinma uses the black paper, which is actually a black Kowaina mask and transforms into his final form. Kawarino then uses him to capture all the Cures.

His demise is in episode 24 where he is defeated by the Cures' new group attack Five Explosion.

In human form, Girinma is a man who wears glasses, a hat, and carries a cane. In his true form, he is a humanoid praying mantis with blades on his arms that slash through objects.

Girinma fears his superiors and is often threatened by Bunbee. At first, he is confident to seize the Dream Collet. With each defeat, however, he grows embittered to the Cures and will do anything to enact his revenge out of desperation.

He can transform into a deadly praying mantis with arms that slice. 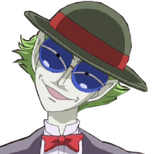 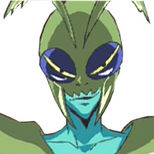 Girinma appears before Nozomi and her friends.

Girinma about get hit by Rouge Fire.

Girinma and Dream snarling at each other

Angry that his attack failed