Directed by Nagamine Tatsuya and produced by Toei Animation, the series premiered on TV Asahi February 2nd, 2014, succeeding Doki Doki! Pretty Cure in its time slot. The series' motifs are mirrors, fashion, dancing, and form-changing, and its themes are love and happiness.

Happiness Charge Pretty Cure! was first announced by Toei in the Japan Patent Office for a variety of goods on October 2 and made public on October 24, 2013. In an issue of Nikkan Sports' Pretty Cure Shimbun newspaper, after confirming Doki Doki! Pretty Cure's 49-episode run, Doki Doki! Pretty Cure's producer Hiroaki Shibata confirmed Happiness Charge Pretty Cure! and its airdate at the beginning of February 2014.[2] A posting for Nintendo 3DS merchandise on Amazon revealed designs for the two main heroines, Cure Lovely and Cure Princess.[3]

On January 3, 2014, Nakajima Megumi of Macross Frontier fame announced that she would voice the series' main character, Aino Megumi. She stated that Pretty Cure was something she had adored for a long time, so it was like a dream to be allowed to star in it.[4][5][6] It was the first time she took another lead anime role after announcing her indefinite hiatus from her music career at the end of March 2014.[7] A day later, the first commercial for the series aired at the end of Doki Doki! Pretty Cure, showcasing Cure Lovely and Cure Princess' transformations.[8]

All around the world, Pretty Cures have been fighting against the invasion of the enemies known as Saiarks! Shirayuki Hime, the princess of the Blue Sky Kingdom, is, in fact, a Pretty Cure, but, unable to defeat the enemy alone, she has fallen behind the others and is in quite a terrible situation. Then, on her quest to find a partner, she meets Aino Megumi (Cure Lovely), and they form a team called Happiness Charge Pretty Cure. Later in the story, they are joined by Cure Honey (Omori Yuko) and Cure Fortune (Hikawa Iona), fight against the Phantom Empire, defeat the Saiarks, and collect all PreCards to fulfill their wish! With the dress-up theme beloved by girls, a completely different Pretty Cure story begins! 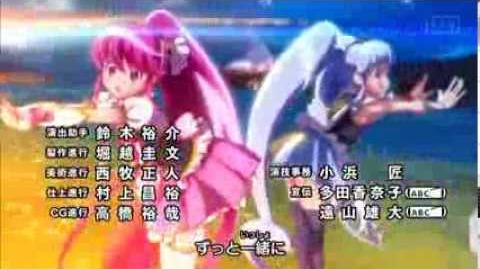