Directed by Kureta Kohei and Kaizawa Yukio and produced by Toei Animation, the series premiered on TV Asahi on February 5th, 2017, succeeding Mahou Tsukai Pretty Cure! in its time slot.

The series' themes are sweets, animals and creativity. The Cures manage a patisserie.

The trademark for this series was filed on October 25, 2016 [1]. It was confirmed on November 28th when Toei and Asahi set up the websites.

Synopsis taken from the Toei Animation website for KiraKira☆Pretty Cure A La Mode.

A cute pa­tis­si­è­re from the "KIRAKIRA Patisserie" transforms into a "Pretty Cure"!?
The story about Cure Whip and the others protecting sweets filled with thoughts is about to begin!

I'm Usami Ichika! I'm a second grade middle school student who just loves, loves, loves sweets!
When my mother comes back from working abroad, I challenged myself to make a shortcake♪ ... However it was...

...interrupted by a fairy named "Pekorin" who fell from the sky!! My gosh~~ it was so surprising!! Hang on, this can't be right! Cake thieves have been making cream explosions... there have been a lot of mysterious incidents in town.......! And the culprit is another strange monster!? They're looking for the energy that resides in sweets called "Kirakiraru", and to do that, they change all of the sweets to a disgusting black color!!

Of course, I won't let this happen to my shortcake. Because, it'll be so important for me to hear my mother say "I love it".... So here's Usami Ichika special! But when I complete my rabbit shortcake-

Well, if that is the case! Usami Ichika is now "Cure Whip" who will protect the sweets... filled with all of those thoughts!!!

Official reveal of the season 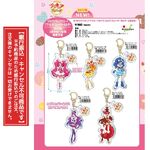 Preview of the Cures and mascot

Preview of the main Cures

Scanned image of the main Cures

Scanned art of the Cures and their civilian forms

Scan of paper dolls with the Cures and their civilian forms

Scan of the Kirakiraru Creamer

Official wallpaper for May (Toei Animation)

Official wallpaper for May (TV Asahi)