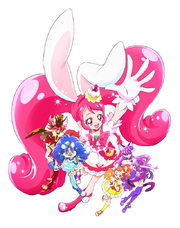 The manga adaption of KiraKira☆Pretty Cure A La Mode has been serialized in Nakayoshi[1], starting in the March 2017 issue to the February 2018 issue. It was created by the Kamikita Twins.

It replaced the Mahou Tsukai Pretty Cure! manga and was followed up by the HUGtto! Pretty Cure manga in 2018.

The chapters feature original stories focussing on the daily lifes of the Cures. In the November 2017 issue, an additional chapter that ties in with the movie KiraKira☆Pretty Cure A La Mode: Paritto! Omoide no Mille-feuille! was published.

Six chapters from the Nakayoshi serialization (March 2017 to August 2017 issue) were collected in the tankobon KiraKira☆Pretty Cure A La Mode 1 Pretty Cure Collection. This first tankobon contains an extra seventh chapter with a manga original villain called Salty Pepper. Additionally, the tankobon has a regular version and a special edition. The special edition comes with a summer themed Dream Story Pretty Cure All Stars booklet.

The seven remaining chapters were published in the tankobon KiraKira☆Pretty Cure A La Mode 2 Pretty Cure Collection. This second release had a additional book-only chapter where the now adult Cures are meeting up and spending time together. Also available was again a special edition version with a Dream Story booklet story that featured the Pretty Cure Super Stars! Cures.

Chapter 01
Ichika, Himari and Aoi are established as Cures who fight against the Kirakiraru Thieves together. Still, they haven't become close friends yet. They bond over making an "a la mode" mash-up of their favourite sweets together.
Chapter 02
Ichika has fallen in love with Akira, her new next-door neighbour. (See episode 6.) Himari and Aoi help her make special chocolates to impress her crush and to confess with. But her confidence wanes when the popular Yukari seems to become her rival for Akira's feelings.
Chapter 03
Some time has passed and Akira and Yukari have joined the trio when they decide to open their own café, the KiraPati. Himari is put in charge of advertising, but showing off Aoi's musical talent and Akira's and Yukari's charms doesn't leave a lasting impression of the café itself. Himari comes up with a special dessert that will charm the customers.
Chapter 04
A stray kitten becomes attached to Akira and won't leave her side no matter what. Yukari guides the others in understanding and taking care of it. When the kitten's mother appears, they try to calm her by communicating with their tails in their Cure forms and making food for the cats. After this, Akira and Yukari have gotten closer as well.
Chapter 05
It's Tanabata and the KiraPati partakes in Ichigozaka's annual festival as part of its stand line-up. The requests of customers are written down on tanzoku papers similar to the Tanabata tradition itself. Ichika wants to grant the unique requests too, so Akira and her go shopping for more ingredients. It starts to rain and Ichika shares a "together umbrella" moment with Akira. They have a heartfelt talk about Ichika's family situation.
Chapter 06
Genius patissiére Ciel visits the KiraPati and observes Ichika working in the kitchen. Ichika, impressed by Ciel's skill, begs to become her assistant. (See episode 19). When a child has a peculiar request for a sweet, the high-and-mighty seeming Ciel shows her kind heart. She reveals her fairy form to Ichika and the others in the end.
Pretty Cure Collection Extra Chapter 01
Akira is taken captive by a sadistic villainess called Salty Pepper. Salty Pepper is very possessive and even physically abuses Akira. The Cures try to rescue her. The underlying plot of this chapter regards the growing romantic relationship between Akira and Yukari, who gets a large role in trying to save Akira (though Akira herself steps up as well in the end), and the message is that possessive love isn't love at all. (This chapter is notable for featuring physical violence very unlike other Pretty Cure media.)
Dream Story Booklet 02
In this All Stars crossover chapter, all Cures partake in an event contest on the beach at Kaidou Resort, with Bunbee as the announcer. The big price is a world luxury cruise trip. The Max Heart Cures showcase a science experiment, the Splash Star Cures (including Michiru, Kaoru and Minori) dance dressed as tennyo youkai, the GoGo! Cures do a limbo contest (with Minazuki Karen as their star), the Fresh Cures do a yosakoi festival performance and the Heartcatch Cures do a (tourist version) Hula dance.

The Cures are briefly interrupted by Moerumba, Ms. Shitataare, Regine and Viblis, who have formed some sort of "villain girl group" and enter the contest dance dressed like brazilian carnival samba dancers (most likely Moerumba's idea). This stresses Bunbee, and he urges them to continue even though Minami's brother Wataru (who is part of the judges) seems clearly smitten with them.

The Suite Cures have formed a rock band, the Smile Cures have a water gun fight with the audience, the Doki Doki! Cures (including Regina) carry a mikoshi shrine as if it was for a festival, the Happiness Charge Cures have a rice eating contest, the Go! Princess Cures are doing a dolphin show and the Mahou Tsukai Cures do (of course) a magic performance. It's finally the KiraKira Cures turn, who make a giant serving of rainbow shaved ice for everyone. Unfortunately, due to Ichika's clumsiness, the trolley is about to roll away. All the pink Cures step in to help her, but the sudden stop makes the shaved ice fall over. Fortunately for them, the audience doesn't seem to mind being engulfed in delicious shaved ice. In the end, everyone has a good time under some fire works, and the "villain girl group" celebrates with a toast that they won the luxury cruise trip.
Chapter 07
Aoi is having trouble with her bandmates, who dislike that she keeps missing band practice in favor of spending time with her KiraPati friends. Music or sweets - what does Aoi actually want to spend her time on? Ciel and the others help Aoi make special sweets to help apologize to her bandmate, and Aoi realizes that pursuing several interests is valid as well.
Chapter 08
The KiraPati has something special in store for their fall program - a cross-dressing event where all the KiraPati girls dress up as boys (something noted to be popular with teen girls). Everyone looks forward to Akira's presentation, but Akira herself notes that she doesn't "cross-dress", she only likes wearing the clothes that suit her. She is popular with the girls wearing a fancy suit, but it's her natural look that ends up making everyone swoon.
Chapter 09
The KiraPati decides to make a special event for lovers, with chocolates as the main sweet due to its reputation as the sweet you confess with. Himari even claims that eating chocolates can make your feelings for someone stronger. She herself falls accidentally face-first into a pot of chocolate and seems to have fallen for Aoi afterwards - could it actually have been the chocolate's doing, or..?
Movie tie-in chapter
Ciel prepares for the sweets contest in Paris, but she is afraid of entering because she thinks her teacher might be sad if she surpasses him. (This could also be put in context of Pikario abandoning her because she surpassed him in ability, or so she thought.) She has a talk with Genichirou, as Genichirou is a teacher (to his dojo students) of his own.
Chapter 10
Pekorin has a crush on a friendly golden retriever (consider that animals have confirmed human intelligence in this series) and the KiraPati members try to organize a nice christmas event where the two of them can come together.
Chapter 11
The KiraPati members volunteer for the local zoo, but Ichika is feeling blue because she had a conflict with her father. She thinks Genichirou doesn't care for her mother because he doesn't urge her to come home. They can patch things up, and Satomi tells Ichika how much Genichirou supports her.
Chapter 12
The Cures celebrate New Year's together and also hold a special New Year's event in the KiraPati, wearing kimono instead of their usual uniforms. Ichika feels nervous because she doesn't seem to have a special goal for the future, but after a talk with her parents realizes that the KiraPati and the time spend making sweets with her friends is her dream. In the end, Ichika's birthday is also celebrated (as it falls near New Year's).
Pretty Cure Collection Extra Chapter 02
A grown-up Ichika meets up with all her old friends from the KiraPati. They go dig up a time capsule they buried years ago filled with wishes for the future. Together they set on doing all the things from the list that they still missed on doing.
Dream Story Booklet 03
The story connects to the first Dream Story, with the KiraKira Cures and the Mahou Tsukai Cures already knowing each other. The HUGtto! Cures have their debut. Hugtan finds Mofurun and wants to keep her as a plushie, which Mofurun doesn't like.

The KiraKira Cures entertain her with making her baby food (of which some is ice cream), while the Mahou Tsukai Cures perform some magic for her. Hugttan does some magic of her own, enlarging the ice cream, making everything very cold. The Cures huddle together for warmth and that somehow melts the ice.

Poster included in the first volume

Retrieved from "https://prettycure.fandom.com/wiki/KiraKira%E2%98%86Pretty_Cure_A_La_Mode_Manga_(Kamikita_Futago)?oldid=408659"
Community content is available under CC-BY-SA unless otherwise noted.