Dig right into an album full of new songs! This bright vocal album, "Cure La Mode☆A La Carte" is going to be released to the public very soon! 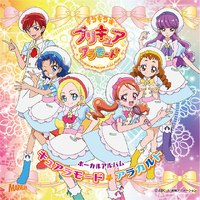 The album consists only of duets and solo songs, along with bonus versions of the first opening and ending.

1. Shining☆Sweet☆Mademoiselle: The first item that will be starting off this album is a jazz like waltz song that will paint a colorful, sweet yet fashionable image within your mind. The songstress for this song is a voice you may be familiar with, because it's Komagata Yuri, the opening singer for KiraKira☆A La Mode. She has returned to sing about how "everyone can be a girl".
2. Shine☆Avec☆Moi☆: "Avec Moi" is the French way to say "With Me". Please listen to this powerful pop song as Ichika and Ciel allows us to see their funny student-teacher relationship...?
3. A Strange Patisserie: Welcome Kitagawa Rie back to the stage as she brings us a new song that'll paint a brand new image for KIRAKIRA Patisserie.
4. Soul Believer ~Wild・Azure・Version~: Aoi's band covered Ganache's song way back in episode 3 and episode 14, so now it's Aoi time to deliver this song the same way Misaki had when Aoi was a little girl.
5. Macaronage of Love and Excitement: Look out world, summer is about to become a lot hotter! Yukari and Akira are here to give you a Latin song number about a forbidden destiny that will leave you sighing. Do you think Yukari and Akira will be able to control this love game...?
6. Noir・Decoration ~Black Painting~: What you hear whispering in the darkness is a melancholic hard beat that entwines itself with every strange turn it takes. Listen to Miyamoto Kanako as she sings from Noir's point of view. And trust me, she's gonna give you a different side to her that is completely different from the Kanako we know and love.
7. Very Hungry☆Happy Decor♡Donuts: When Pekorin is hungry, her ears turn light blue. When she's happy, her ears turn pink. Here is a song that will let you enjoy the colors Pekorin's ears turn when she is making donuts with Ichika. It's about time we start this surreal sweets time☆
8. Caramel Days: Unlike Petit*Party∞Science, this song will be a mid tempo ballad that depicts Himari's character development of her getting over her shyness.
9. SHINE!! KiraKira☆Pretty Cure A La Mode ~Long・Intro・Version~: Many people have heard this version in the anime. Now this time, we are giving you the Long Intro Version. Toei hopes that you still enjoy it.
10. Let's・La・Cookin'☆Showtime ~KIRAKIRA☆Patisserie・Version~: You have heard the five Cures sing their own solo versions in their "sweet etude" character singles. And now that Ciel is going to get her solo version of the song as well, that means we're giving you a version where all six members will sing the song together! This song finishes the album off like it's a shining curtain call.

Retrieved from "https://prettycure.fandom.com/wiki/KiraKira%E2%98%86Pretty_Cure_A_La_Mode_Vocal_Album_Cure_La_Mode%E2%98%86A_La_Carte?oldid=419808"
Community content is available under CC-BY-SA unless otherwise noted.