"With the magic words "Cure Up♥RaPaPa!", two worlds will now be connected!"

The series' themes are sorcery, gemstones, and centrally friendship. It takes place in both the No Magic World and the Magic World, with the main characters travelling back and forth between them.

The trademark for this series was filed on October 20, 2015 [1], but was trademarked once again on November 4, 2015, with the official translation of the series on the rainbow of the logo. It was confirmed on November 26 when Toei and Asahi set up the websites.

Asahina Mirai, a soon-to-be student in junior high, witnesses an object fall from the sky one night during spring break. Excitedly exclaiming that it could be a witch, Mirai sets off the next morning with her beloved teddy bear Mofurun to search the park. At the park, Mirai witnesses a girl soaring through the air on a broom. Excited and curious, Mirai barrages the girl with questions. The young witch introduces herself as Riko and explains that she's come to the "No Magic" World to search for certain objects. The two girls notice that they're wearing similar pendants.

Meanwhile, Batty, a companion of Dokurokushe the Wizard of Darkness, appears in front of Mirai and Riko! Batty demands that Riko hand over the "Linkle Stone Emerald", which Riko herself had been looking for. To make things worse, Batty uses dark magic to create a monster known as a Yokubaru! Mirai, Riko, and Mofurun join hands. With the magic words "Cure Up RaPaPa!", their pendants shine a magical light over them! The legendary witches "Pretty Cure" are born!

Asahina Mirai (朝日奈みらい, Asahina Mirai?) / Cure Miracle (キュアミラクル, Cure Miracle?)
Mirai is a thirteen-year-old girl who is just about to enter her second year in middle school. She's strange, lovely, funny and an energetic girl who is interested in many things. Now that she can transform into a Pretty Cure, Mirai is given the opportunity to attend a "magic school". Her goal is to study the magic she loves and to gain Riko's admiration. Her alter ego is the legendary witch, Cure Miracle whose theme color is pink.

Izayoi Riko (十六夜リコ, Izayoi Riko?) / Cure Magical (キュアマジカル, Cure Magical?)
Riko is a thirteen-year-old girl who attends a magic school. Although she is great at studying, her magic is very weak so she hopes to become a respectable witch in the future. Living together with Mirai, her life become bright and a little more worrisome. While searching for the jewel "Link Stone Emerald" in the "No Magic" World, she met Mirai. Her alter ego is the legendary witch, Cure Magical whose theme color is purple.

Mofurun (モフルン, Mofurun?)
Mofurun is a toy teddy bear Mirai received from her grandmother, Kanoko when she was a little girl. Being extremely important to her, Mofurun goes everywhere with Mirai. When Mirai and Riko became Pretty Cure, Mofurun gained the miraculous ability to talk! She is able to have a good sense of magic and she ends her phrases with "~mofu".

Dokurokushe (ドクロクシー, Dokurokushe?)
The wizard of darkness who seeks the "Linkle Stone Emerald" to plunge the world into darkness. He is a wizard shrouded in mystery. It is revealed in episode 21 that Dokurokushe is, in fact, Kushe, someone who used to be a professor at Magic School. He became Dokurokushe when he experimented with too much Dark Magic.

Yamoh (ヤモー, Yamoh?)
Dokurokushe's second in command is a humanoid gecko. As only he is able to sense Dokurokushe's will, he's the one who sends out Batty, Sparda, and Gamettsu. He finds out where the Linkle Stones are through divination. In the later half of the series, he receives a design change and starts attacking the Cures as well.

Sparda (スパルダ, Sparda?)
Another underling created by Dokurokushe. She is a humanoid spider person and a bold and prideful tactician who sets traps to lure the Pretty Cure in order to find the Linkle Stone Emerald.

Gamettsu (ガメッツ, Gamettsu?)
One of Dokurokushe's created underlings who is a humanoid turtle soldier. Even though he seeks the Linkle Stone Emerald for Dokurokushe, he's more fired up to beat up the Pretty Cure as a dignified soldier.

Deusmast (デスマスト, Deusmast?)
Deusmast is an evil being whose intention is to unleash chaos upon the world. They currently reside in the sun.

Labut (ラブー, Labut?)
A mysterious genie who came from a golden lamp in the No Magic World. He is sly and has no memory of why he exists and why he was awakened. He brought Yamoh back to life in episode 22.

Shakince (シャーキンス, Shakince?)
Shakince is a monster who is awakened from a stone statue. He is a follower of Deusmast, the never-ending chaos. He executes his missions while speaking like a soldier. He ends his sentences with "~teki".

Benigyo (ベニーギョ, Benigyo?)
Benigyo is a monster who is awakened from clay like earthenware. She is a follower of Deusmast, the never-ending chaos. She speaks like a gyaru.

Orba (オルーバ, Orba?)
Orba is a loyal follower of Never Ending Chaos. He speaks politely but becomes cold and manipulative when carrying out a mission. He appears for the first time in episode 34.

Chikurun (チクルン, Chikurun?)
Chikurun is a bee fairy accompanying Orba. Chikurun tries to spy on the Pretty Cure to gain information on them and ends up interacting with Mofurun in comedic ways.

Kouchou (校長, Kouchou?)
The principal of the Magic School who is also the greatest magician of the Magic World. When he saw Mirai and Riko transform into Pretty Cure, he proposes that Mirai attends "Magic School".

Kyoto (教頭, Kyoto?)
The vice principal of the Magic School who is much stricter than Kouchou.

Magic Crystal (魔法の水晶, Magic Crystal?)
The crystal ball owned by Kouchou. She can be rather moody but is good at understanding Kouchou.

François (フランソワ, François?)
The owner of the clothes shops in Magic World. He is a busybody and having trained in fashion in the No Magic World, he is quite the expert in it.

Gustav (グスタフ, Gustav?)
The owner of the broom shop in Magic World. He is known to repair and remodel brooms and even adds a little decoration to them if he sees fit.

Todd (グスタフ, Todd?)
The owner of the fruit and vegetable shop in Magic World.

Isaac-sensei (アイザック先生, Isaac-sensei?)
An elderly teacher in Magic World. He is very warm and friendly and often loses his fake teeth when he speaks.

Jun (ジュン, Jun?)
One of the students at the Magic School. She is somewhat tomboyish and confident yet she has had poor attendance.

Kay (ケイ, Kay?)
One of the students at the Magic School. She comes to class late and is often left behind as well, but she has an easygoing personality.

Emily (エミリー, Emily?)
One of the students at the Magic School. She is very easily scared and is said by Kyoto to have failed her broom flying test.

Liz (リズ, Liz?)
A student teacher at the Magic School and also Riko's sister. Riko aspires to be like her someday.

Lian (リアン, Lian?)
A famous archaeologist in the Magic World and also Riko and Liz's father.

Takagi-sensei (高木先生, Takagi-sensei?)
A maths teacher from Tsunagi First Middle School and the homeroom teacher of Mirai and Riko.

The preview poster of the two Mahou Tsukai! Cures and their form changes

Scan featuring art of the Cures and the mascots

Scan of their civilian forms in their witch outfits

A scan revealing more about the series 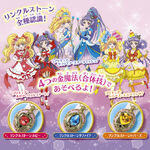 Scan of the Style Forms with the Linkle Sticks

Scans of Cure Felice with Miracle and Magical

Scan of Felice with Miracle, Magical and Mofurun

Preview of Over The Rainbow Style

Official wallpaper for May (Toei Animation)

Official wallpaper for May (TV Asahi)

Official wallpaper for May (Asahi Online)