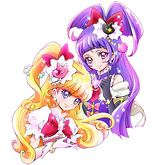 Twelve chapters of Mahou Tsukai Pretty Cure! were serialized in Nakayoshi[1] from the March 2016 issue to the February 2017 issue. The manga was created by the Kamikita Twins.

It replaced the Go! Princess Pretty Cure manga and was followed up by the KiraKira☆Pretty Cure A La Mode manga in 2017.

The plot focusses on Asahina Mirai's and Izayoi Riko's relationship and their daily lifes, with Ha-chan being a toddler for most of the first volume and a teenager in the second volume. Mirai's personality was slightly changed to a playful airhead whose disorganized magic occasionally causes trouble as well. The relationship between Mirai and Riko is that of a lovey-dovey couple who raise a child together.

While most of the secondary characters (like Kouchou and Kyoto) are the same, the villains from the anime series don't appear at all. Sometimes minor enemies exclusive to the manga adaption appear and the fourteenth chapter introduces a manga original villain as well.

The second tankobon, Mahou Tsukai Pretty Cure! 2 Pretty Cure Collection collected another six chapters from the September 2016 issue to the February 2017 issue, along with the aforementioned fourteenth chapter. The second volume was published as a regular version and a special edition, the special edition comes with a booklet containing a crossover chapter with the Pretty Cure Dream Stars! Cures.

Promotional artwork of Miracle, Magical and Felice and Mofurun

The three Cures and Mofurun for New Years 2017

Retrieved from "https://prettycure.fandom.com/wiki/Mahou_Tsukai_Pretty_Cure!_Manga_(Kamikita_Futago)?oldid=398917"
Community content is available under CC-BY-SA unless otherwise noted.