Nightmare (ナイトメア, Naitomea?) is an evil organization for the main villians from Yes! Pretty Cure 5. Their mission is to capture the Dream Collet for the chairwoman, Desperaia, so she can gain immortality to bring despair to the world.

The base for the villains appears to be located in the middle of a city district. It is a huge skyscraper with many unseen offices, Bunbee's board room, Desperaia's office on the top floor and a roof top. The whole layout is based on a Japanese corporation/evil corporation.

The subordinates that were sitting on the table wearing masks were the Palmier citizens and were brainwashed after they got captured and brainwashed, and disguised themselves as humans. Soon in episode 48, they have soon went back to normal selves and forms.

Desperaia is the main villain from Yes! Pretty Cure 5 and is responsible for the destruction of the Palmier Kingdom. Thid chairwoman communicates with her employees via monitor most of the time. She wants to get the Dream Collet to gain eternal youth and eternal beauty. She receives her goal, but she loses the control of her own power, so she sacrifices herself to rescue the Cures and the Palmier citizens. After her fall, the organization is destroyed.

Each member of Nightmare has a human and an animal-like monster form. They have the order to obtain the Dream Collet for Desperaia, but they have to face the Pretty Cures. The Kowainas are their summoned monsters. If a employee does fail his/her job for several times, he/she gets a black card which turns into a black Kowaina mask that makes him/her stronger by transforming him/her into a giant monster, but the employee loses his/her mind. 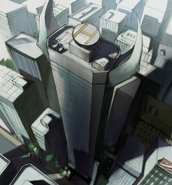 Employes of the Second Division

Nightmare is destroyed
Community content is available under CC-BY-SA unless otherwise noted.
Advertisement