The main building has three floors. Inside, there are a student council office, a science room, an art room, a music room, a teacher's office, a library, an infirmary, and a cafeteria. In the front of the main building, it is shown that there is a garden.

Outside the main building, there are separate buildings for gym, club rooms, storage, animal cage, and a backyard.

The winter uniform is made with one piece dress. The dress has purple designs, and has white as its main theme. In its necktie, it has a purple color, and has a yellow ribbon in the middle. Its sleeves have a purple color, along with the socks, and the shoes are black.

The summer uniform resembles the same as the winter one, however it has short sleeves, and has a grey-ish color, and has white designs, along with white socks, and black shoes.

The winter uniform is made from two pieces suits with light gray as its main coloration. The tops has turtleneck collars and dark blue sleeves with white borders. On the tops, there are half circle-shaped pockets on each sides. The shirt's buttons and the pockets are bordered dark blue. The bottoms are plain long pants.

The summer uniform is made from two pieces suits. However, the shirt is now short-sleeved with blue linings, the collar is unbuttoned, and the color becomes white. There is only a single pocket, located on the left of the chest area. The bottoms are still plain long pants, but it's colored blueish gray now.

The standard sports uniform is a short-sleeved white shirt, a purple jacket, and long purple pants.

There's also a coat for the students to use during cold weather. The coat's main coloration is white with purple borders. It has two large pockets on each sides. The coat also has the same length as female uniform.

Jun along with some other boys wearing the boy uniform. 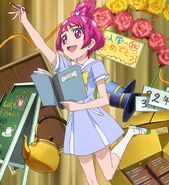 Sharuru in her human form, wearing a summer school uniform. 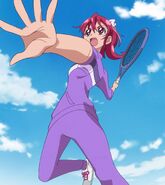 Mana playing tennis, as she is seen wearing a track suit.

Concept art of the female uniform.

Card of Mana in the winter uniform from the Doki Doki! Pretty Cure Appeared♥ Card Collection.

Card of Rikka in the winter uniform from the Doki Doki! Pretty Cure Appeared♥ Card Collection.

Card of the foot wear paired with the winter uniform from the Doki Doki! Pretty Cure Appeared♥ Card Collection.
Add a photo to this gallery

Mana along with Jun picking up books in the library.

Mana, with the nurse, Jun and other students, in the nursery.

Mana, along with the baker, serving the students in the cafeteria.
Add a photo to this gallery

Retrieved from "https://prettycure.fandom.com/wiki/Oogai_First_Middle_School?oldid=377764"
Community content is available under CC-BY-SA unless otherwise noted.