Start a Wiki
The Pickruns (ピークルン, Pīkuruns?) are special living devices in the shape of keys and fairies in Fresh Pretty Cure!. They were used to give the girls the power to transform into Pretty Cure and later to power-up their attacks to their "Fresh" versions. In the movie Fresh Pretty Cure!: Omocha no Kuni wa Himitsu ga Ippai!? Love's Pickrun transformed and allowed the Cures to be able to transform into Cure Angels. They are also capable of providing other abilities for their owners.

There are four Pickruns, one for each Cure.

The Pickruns look like little keys with heart-shaped heads and short, thin arms. Their bodies have a cylinder form and the key blades are on their back. On each of their heads is a heart adorned accessory based on their masters' passions:

In white form, Pickruns retain pale variations of their theme color on their heads, eyes, and accessories. They also gain big angel wings. The colors of the Pickrun reflect their names. Pirun is pink, Burun is blue, Kirun is yellow and Akarun is red. Both Burun and Akarun have tear-shaped eyes, while Pirun has round eyes, and Kirun has "sharp" eyes.

When lightning strikes a temple in the Kingdom of Sweets, four Pickruns fly out of it, and go to the human world.

The Pirun is the first to find its master as Love is walking out of the fortune teller's place. After seeing Love try to protect Chinen Miyuki, the Pirun goes into Love's cellphone, turning it to a Linkrun and triggering the birth of Cure Peach. Chiffon later calls upon the Pirun when Love is struggling against a Nakewameke.

The Burun found Miki spending time with her brother, Kazuki. When Kazuki falls sick during a Nakewameke attack, the Burun helps out by turning Miki's cellphone into a Linkrun and triggering the birth of Cure Berry. After Chiffon is touched by Miki's strong heart, she summons the Burun and Cure Berry later uses it in her fight against a Nakewameke. However, Cure Berry gets her Pickrun after Cure Peach and Cure Pine has gained theirs.

When the Kirun goes into a church, it sees Inori praying there. When Inori comes under attack by Lucky, whom Eas turned into a Nakewameke, it goes into Inori's cellphone. This turns it into a Linkrun, and triggers the birth of Cure Pine. When Cure Pine decides to go and help the girls against a Nakewameke, Chiffon summons the Kirun and Cure Pine uses it in her fight.

It took the Akarun quite a while to find it's master. When it was first spotted, Love and the other girls went on a crazy chase trying to catch it. While Pretty Cure were fighting Eas, Soular, and Westar, it took off. The next time it was spotted, it sees two candidates, Eas and Miyuki. The Akarun cannot decide who to go to, and it flies off after a fight with a Nakisakebe. After Eas' death, Chiffon calls upon the Akarun, and it chooses Setsuna as its master in order to save her life, allowing her to transform into Cure Passion.

During a battle with Toymajin, the Toy Kingdom is brought to near destruction. Love discovers that Usapyon used a Miracle Light to interact with her. With the power of the Miracle Lights, Pirun turns into a white Pickrun, allowing Cure Peach to transform again into Cure Angel.

After the four Cures are beaten down by the fusion of Northa and Klein, the Pickruns transform into whites as they gain the power of feelings by the inhabitants of Labyrinth, allowing all four to transform into Cure Angels.

A Pickrun can merge with a cellphone, changing it into a Linkrun. They remain in the Linkrun until called upon by Chiffon. When used in tandem with the Linkrun, a Cure Stick is summoned, giving the Cures the abilities to power up their attacks.

The Pickruns are vital to Chiffon's growth and development. With Pirun summoned, she can eat human foods, summoned by Love. With Burun, she can wear clothing, summoned by Miki. With Kirun, she learns to speak and Inori is able to understand the language of animals. Akarun allows her or Setsuna to teleport herself or with others. 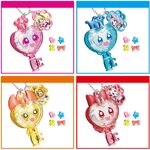 Burun as a toy

Kirun as a toy

Retrieved from "https://prettycure.fandom.com/wiki/Pickruns?oldid=479946"
Community content is available under CC-BY-SA unless otherwise noted.