A spring carnival held in the country of dance and song, Harmonia, is beginning. Haruno Haruka and her friends also join the festival to learn dance and song from their senior Pretty Cure warriors. However, the fairies go missing, and the carnival is thrown into confusion. Even worse, the announcers Odoren and Utaen seem extremely suspicious, and the guardian dragon of Harmonia has started a rampage, angry at the chaos at the carnival. In order to protect the peace of Harmonia, the 40 Pretty Cure warriors work together to create a miracle through dance and song filled with hope.

While waiting for a day of shopping, Minami compliments Haruka on her singing. Haruka just mentions she's happy to go shopping that she's singing. When Kirara arrives, she notes the singing and thinks she's practicing for the singing exam, which sends Haruka into a panic fit - she can't sing when she's in front of a crowd! However, her attempt to overcome her stage fright is halted when an invitation lands in her hands, one being given to other Pretty Cure elsewhere. They're being invited to the kingdom of Harmonia for a celebration. However, at the same time, Odoren and Utaen, two devious criminals have captured the kingdom, only to learn that the Pretty Cure have been invited to the kingdom. With that, he plots to take care of the Cures.

One by one, the teams are gathered and start to arrive at the kingdom. As they do, the Happiness Charge team encounters the Princess Pretty Cure team and, upon landing, introduce themselves. Haruka and Kirara are flummoxed by Hime's long name, but Minami is able to nail it on the first try. Soon after, Odoren and Utaen meet up with the two teams and get them ready for the carnival to begin. At the opening ceremonies, Odoren and Utaen introduce the girls and let them perform before interviewing. Between these moments, we learn a bit about the girls - that Setsuna is still trying to reform Labyrinth, thus unable to really participate in dancing with Love and her team, that Saki and Mai rarely see their fairies much, Nozomi and Erika talking about Coco and Coupe's human forms and more.

Before the next performance, Odoren allows the Fairies to get refreshments and, while the girls go off for their next performance, Utaen returns in possession of Cures' transformation devices, turning to the screen and telling the audience to not tell the girls what they did. However, the girls are starting to get worried over the Fairies being late with snacks and the pink-types prepare to hunt them down, only to be stopped by Odoren to restart the presentations again. During the interviews, Mana attempts singing again, which dazes everyone. When Haruka realizes their turn is up, she panics again, only for the Happiness Charge team to give her a pep talk. Once more, more fairies disappear for refreshments. After the last performances, the teams start getting worried over the missing fairies. However, Utaen blows their attempts to steal their devices and fairies, only to escape with both. Haruka, Minami and Kirara attempt to transform, only for Odoren to steal the devices. After a failed attempt to transform himself, he proceeds to reveal he stole the kingdom, locks away the devices and traps the other teams save for the Princess Pretty Cure in the basement. However, faced with despair, Haruka fights back with song and dance, conquering her fear and, through this new power, frees the girls and their powers, transforming into Pretty Cure.

Outpowered, Odoren launches his Robbens to fight the teams, but they're able to drive them off as the Princess and Happiness Charge teams find the royals. However, they find out that the Spring Carnival is a carnival to appease a guardian dragon and there's no telling how angry he'll be with the thieves' antics! With the deity awoken and angry, the royals beg the Pretty Cure to stop him. As the Princess Pretty Cure beg him to stop, Lovely, Princess and Honey rescue them from being incinerated, discovering special Princess Keys as they do. The other teams urge the Princess Pretty Cure to use their new keys to take up a new Mode Elegant and use the attack Rainbow Tornado to appease the deity, who restores Harmonia to its pristine state.

At the deity's request, the Princess Pretty Cure perform the last number while Odoren and Utaen end up as janitors. After the excitement, Haruka, Kirara and Minami head back for school, though Haruka's more determined at singing that before. She tells the others that it's because the other Cures have given her strength and courage to go forward and she'll ace the exam. 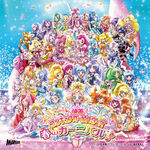 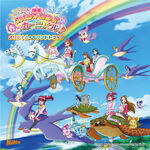 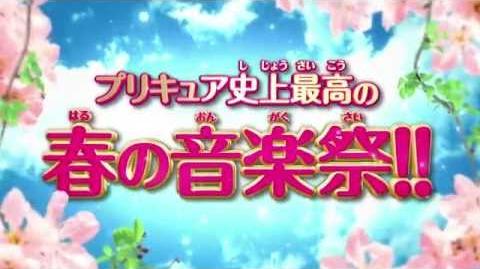 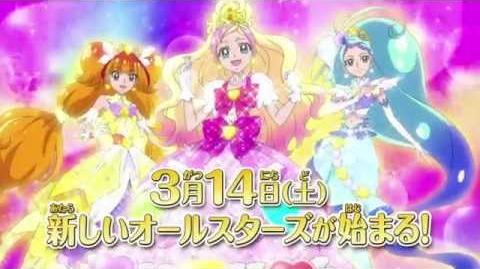