Pretty Cure All Stars New Stage 2: Friends of the Heart

Pretty Cure All Stars New Stage 2: Friends of the Heart

The story begins in the Fairy school where they trained fairies and mascots to be future Pretty Cure mascots. Tarte was invited to be the guest speaker and show the class the Pretty Cures and some transformation devices. One of the students, Gureru was jealous of the Pretty Cures and started to make a fuss in the class. He was reprimanded by the teacher, causing him to run out of the classroom. He later met another classmate, EnEn who loved the Pretty Cures but was very shy. They started talking about Pretty Cures when Gureru heard a voice calling to him.

Following the voice he heard, they eventually found a hidden cave and broke the lock to the room, where a crystal ball located in. It transformed using the shadow of Gureru. The shadow, named Kage, was able to take advantage of Gureru's jealousy and tricked him into helping him luring the Pretty Cure into a trap. Enen was reluctant to join them but he had no choice than following them. Meanwhile, the Pretty Cures from Futari wa Pretty Cure Max Heart to Smile received a party invitation to the fairy school and they all decided to head out there. The Doki Doki team were having tea when Alice brought some "gyoza natto" candies, claiming it is banned now. Makoto tried it and it was terrible. Candy called Sharuru through a holographic message and wondered if they are invited to the party. During the message, Mana met Miyuki for the first time, and the Doki Doki team decided to go to the fairy school.

Tarte and the teacher got captured by Kage's (the shadow's) spawns where the Pretty Cures who have arrived were turned into crystals and their mascots and transformation devices captured. Kage's next target is the Smile team, who have just arrived. Enen was sent to steal their Smile Pact but failed since he was spotted. This frustrated Kage and he tried to steal it instead but was spotted by Reika. The Smile Team transformed and started battling Kage. However, by using the Pretty Cure Textbook, Kage was able to counter their moves. He finally caught hold of their Smile Pact and they de-transformed. Candy escaped and went to find Pop.

Kage turned them into crystals and he showed the other teams being under the same predicament before leaving them. Miyuki hears Enen crying while apologizing to her but she forgives him and asks to find the Doki Doki team for her and tell Cure Heart to save everyone. She then winks at him before being crystallized completely. Meanwhile, Gureru was proud that he defeated the Pretty Cures but Kage instead wanted to destroy everything and started attacking the school and the students. Kage also infected the Sun panel in the sky and everything turned dark. Gureru asked Kage to stop but instead was attacked by one of Kage's spawns. Enen was eventually able to find the Doki Doki team but he was too scared to tell them anything and fled, bumping into Gureru, who was being chased by Kage. As soon as the Doki Doki team transformed, Kage looked up the Pretty Cure text book and could not find anything about them, causing him to retreat. Enen still attempts to explain to Mana and her group about what happened but he started crying, causing Gureru to snap at him. Mana was able to break up the conflict, explaining that friends shouldn't being fighting each other. This calms Enen down, wishing to smile like Happy did.

Meanwhile, Kage threw the captured mascots into a waterfall but Mepple managed to break free and call Raquel on his phone to explained to the Doki Doki team where they are. After learning what has happened, they began to head to the waterfall. However, Kage sent spawns of himself to attack them. Cure Heart and her team hold off most of these spawns while Gureru and Enen continues rush towards the waterfall by themselves. They fell off a cliff but Candy and Pop arrived to save them. They were able to find the mascots and breaking the net with a wooden sword to free them in order to find the captured Pretty Cures.

Kage sent more spawns to capture the mascots again and Gureru and Enen felt it was pointless now. But Candy did not give up and cheered on the mascots. Tarte gave everyone a Miracle Light and they cheered for the Pretty Cures and Mascots. The Doki Doki team's health was restored and the mascots arrived to free the Pretty Cures, enabling them to transform just in time to push the Sun panel back before it crashed into the ground. Kage tried to ambush the Doki Doki team but Cure Happy jumped in and defeated him. Both Happy and Heart expressed great joy in being able to meet each other before they joined with the others and started battling the spawns.

Cure Black, Cure White, Cure Blossom and Cure Marine fought Kage. Cure Beat and Cure Passion saved Gureru, Enen and Candy from a spawn. The two of them told them it is all right to express your feelings and make amends. They then joined the others as Enen explained to Gureru that the two Cures were once enemies who turned a new leaf and become Pretty Cures. Kage tried to turn the Pretty Cures into crystal once again but the Miracle Light healed them.

Another big spawn of Kage appeared in front of the Smile and Doki Doki teams but they were prepared to face him this time. Cure March used 100 March Shots and Cure Sunny used the Sunny Fire with her fist. Cure Rosetta shield them as Cure Beauty and Cure Diamond used their Beauty Blizzard and Twinkle Diamond combo attack. Cure Peace and Cure Sword followed up with their Peace Thunder and Holy Sword attack. Finally, Cure Happy and Cure Heart dealt the final blow with their Happy Shower and My Sweet Heart attack respectively. After the Heartcatch team cleared the path of spawns, Kage became a giant spider and attacked the Doki Doki team. They began to struggle with the beams when the rest of the Pretty Cure arrived and helped pushed the beam back to Kage.

Kage was then returned to his small stature. Gureru approached him and admitted that he was jealous of the Pretty Cures, however he realized he was not alone and Enen was beside him. He wanted to make friends with everyone in school and Kage felt the same way too. Kage was touched by Gureru and turned back into a crystal ball. Gurere then apologizes for his actions, which everyone forgives him with Tarte, along with the encouraging words of Heart and Happy, then telling Gureru and Enen if they worked hard, they will also become the partners of future Pretty Cures. Everyone agreed and they help to rebuild the damage property across land. They finally got a party and everyone enjoyed themselves... 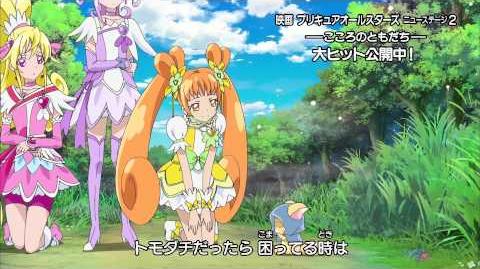 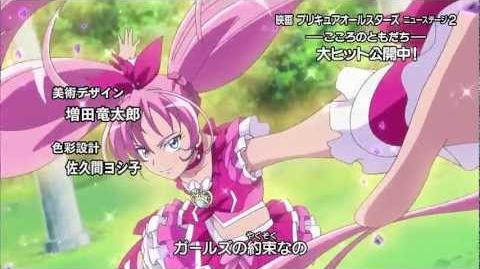 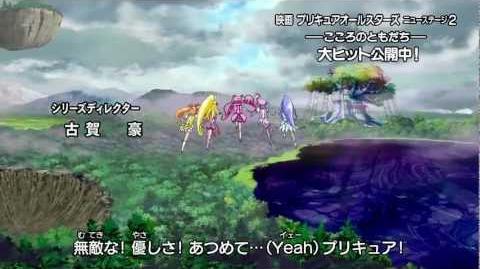 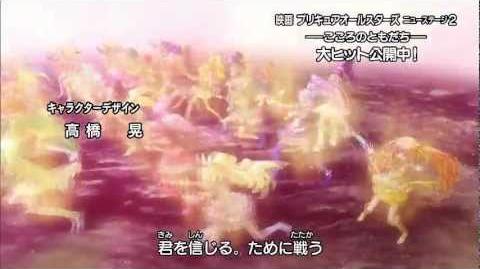 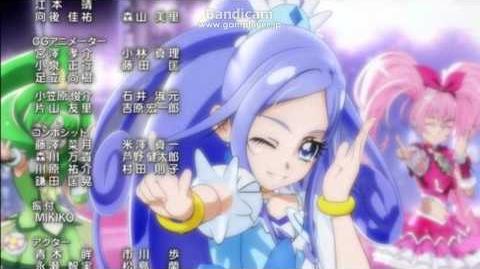