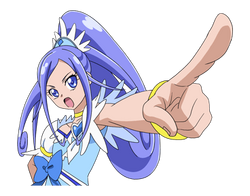 Before you read through this page, be sure to look at the main Fandom Community Guidelines and memorize them.

This wiki also had problems with homophobic and transphobic users before, an offense that leads to quick and, depending on the offense, long bans. This includes the comment sections and the forums. Don't confuse an opinion (such as "I don't like mayonnaise") with spreading hate and intimidating other users and thus, don't call it your "opinion" as well.

This wiki has a couple of simple rules that might not be applied for other wikis, but are in this. This page describes the rules, explaining how it works and the reasons behind them. They are then followed by the consequences of not following these rules. If you want regular rules, here they are: Fandom Community Policy.

Some notifications before starting:

As per Fandom's Terms of Use, it is not allowed to link or mention any kind of illegal streaming sites where to watch the series. Any comment message wall post, Discussion post that mentions (or linking) these sites will have their post removed and the user will recieve 1 day block, followed by 2 weeks, lastly 1 month. If this gets repeated after the 1 month block, this matter will be passed to Fandom Staff.

Pretty Cure is Pretty Cure, neither Precure nor PreCure

This was the first official translation of the word "Precure", which was long revealed to be a simplified version of "Pretty Cure". While they have gone back to their words in the recent years, Pretty Cure is still the official translation and shall be used whenever mentioned in articles and used as article titles. Editors do not need to follow this rule in talk pages or forums, but when writing articles, this rule is applied.

Each season of the Pretty Cure series is self contained

With every year comes another season of Pretty Cure that has little or nothing to do with the one before it. Once a series ends there is no next episode and there is no previous episode of the new series. The only exception to this rule are the sequels since they use the same characters as the previous season.

If a season or a media's title includes a music note, exclamation mark or stars, the article title will use them if they are found and it is possible to copy and paste them. While this means extra work when linking said articles, it is to follow the title given.

If a movie is titled Futari wa Purikyua: Kibou no Mizu, it would be translated to "We Two are Pretty Cure: Water of Hope". However, there are so many varities of the translations, others might think it is "Futari wa Pretty Cure: Hope Water", "We Are PreCure: Hope's Water", etc.

If we were to use translated subtitles as article titles, we would have to come with a ridiculous amount of redirects, and even then it would be complicated if we decided to change the article title to another translation, thus changing all the redirects, too. It is much easier to just using the Japanese versions to avoid these un-needed troubles.

If a full name is officially in the Japanese order (*family name* *given name*), it shall follow said order

A girl born and raised in Japan is named Misumi Nagisa there. If she had been in a European or American country, people would refer to her as Nagisa Misumi, because that is how we do it here. However, in this wiki, she will be named Misumi Nagisa regardless of the wiki's language, and her article title will be named as such, as well as other times her full name is written.

Most of the directors, voice actors/actresses, artists and others are Japanese and have Japanese names. As such, they will follow the same pattern by having their family name first, followed by their given name.

If you have trouble with spelling or using grammar, then please write the intended article on Word or another program that will notify you of grammar or spelling mistakes so you can correct them. Also try to add some spacing here and there if you see that the synopsis is a block of text.

If you write with bad grammar more than you don't or misuse capital letters, then your edits will be undone or changed. If you're unsure, try to contact an admin or one of the content moderators if they can proofread your edits.

Often, we get spammers who create articles just for the sake of creating them. Some of these are directly copied from Wikipedia. If this happens, the article will be deleted, and the creator will get a warning.

As badges can be earned by doing various tasks such as making edits, uploading photos on pages and making blog posts etc. Please do not edit for the sole sake of getting a badge in order to earn points and get ranked higher on the leaderboard. Common signs of badge hunting is by editing on a single page (such as their userpage) once per day or by adding a category on a page.

If a user is showing signs of badge hunting, they will be getting a warning message on their wall and be blocked for 1 day. If repeated offensive, the block will be expanded to 3 days, 1 week, 1 month, 3 months, 6 months, 1 year and lastly infinite.

Since Discussions are like a forum doesn't mean anything can be posted there, all of the posts needs to be related to Pretty Cure or Fandom in general and any off-topic posts will be deleted. Repeated offensives will result with a warning message on your wall.

Please report bad posts by using the dropdown for any post or reply, and clicking 'Report'. If it's not a clear violation of our guidelines, please message one of the admins instead of reporting. If a user is abusing the use of the report button, a block will be given out and will last 1 day.

This happens every so often, despite it being in the official rules because of copyright infringement. Regardless of how well the fan-picture is compared to official images, they shall not be used. Most artists also dislike it when you upload their pictures without warning or credit.

When it comes to profiles and forums, if you don't have their explicit okay or you aren't the artist yourself, don't upload the picture. Linking to it is fine.

Fanart by the official staff such as the manga artists and the key animators are considered okay material to post, unless they damage the image of the original series, but even then they need to be sourced and credited. If you're not sure, contact an admin.

Any screenshot images with subtitles must not be used. Please use raws or turn off the subtitles whenever possible. Try to avoid low quality and .jpg screenshots unless the screenshots are high definiton and turn your screenshot settings on your media player to make .png screenshots to avoid a .jpg's lossy compression.

Private galleries are allowed to post fanart for show only/discussion but any copyright violations will be deleted immediately and also any "orphaned" or unused pictures will be deleted on sight.

Also please remember that this is not an imageboard or a file dump so you should not just keep adding random pictures and/or all of the pictures in a given animation sequence!

If you want to replace low quality .jpg images from older episode or movie pages with a higher quality .png image, you can remove the jpg images from the page and put them in a list on an admin's message wall, and they will mass delete them. As .jpg can only be replaced by .jpg and not by .png, you will have to upload the png and someone has to delete the jpg.

For images and sound files, please keep in mind that they need a proper filename to be found with the search function and to be easily sorted in episode and character galleries. Always include the abbreviation used on episode pages if it's an episode screenshot. For example, a screenshot from episode 15 of KiraKira☆Pretty Cure A La Mode should contain the text "KKPCALM15" or "KKPCALM 15" in its filename. If a specific character is depicted on the image or screenshot, try to include their names.

If you upload new images to a gallery, always include a caption text that decribes what is happening on the image. Please be formal and don't make up your own plot or dialogue.

Adding youtube videos is allowed but with a few provisions:

Recently we had a lot of trouble with people adding unnecessary trivia, especially on character pages. The rules for trivia are:

Look at the rules and remove uninteresting trivia from character and episode pages to help keep the wiki clean. Only add trivia if they follow the above rules. In the first place, please focus on different aspects of articles instead of trivia first. If you are unsure what to help with aside of trivia, please look at this forum thread.

If you do not follow these rules, these are the consequences, ranked from least to most serious.

If you have made a smaller mess with only small or trivial mistakes, those mistakes will be redone with no warnings or other consequences. It will also happen with bigger mistakes should the cleaner think that the editor in question does not seem like he or she will make the same mistake.

Everyone can be cleaners, as long as they follow rules above and can use proper grammar. If, in cases, edits must be done by administrators, please contact said admin, with a message title saying the request (Example: You need a page to be deleted, title your message with "Deletion Request" or similar), so that he or she will immediately know what it is about and can therefore be as immediate as possible.

If rules are continuously broken, or broken majorly, the editor in question will get a warning by either another editor or an administrator.

Everyone can give others warnings, as long as the reason behind the warning is reasonable and formal, with neither rude comments nor insults (this usually goes without saying). If, by any chance, someone complains about their warnings, the administrator or a third editor should be contacted and put into the case. If the warnings are continuously ignored, the warners can contact the administrator to be put into the case with a message title saying the request.

The most serious consequence. If the user in question continuously break rules, ignores eventual warnings and does not give any reasonable excuse or argument to do so, he or she will be banned for an unknown amount of time from the Pretty Cure Wiki. After the banned time is over, the user can choose to come back or keep distance.

Usage of multiple accounts are allowed on Fandom. But if you are using a sockpuppet to avoid a block, harassing users, or causing trouble such as vandalism, your alternate account will be permanently blocked by any means. If your block isn't permament on the main account, then you have to wait for the block to expire.