The Rainbow Bracelets (レインボーブレスレット, Reinbō Buresuretto?) are called out by Pollun to Misumi Nagisa and Yukishiro Honoka to help their fight against the Evil King. First appearing in episode 30, they grant Pretty Cure stronger powers and allow them to perform Rainbow Storm.

The rainbow bracelet is a rounded, silver object worn on the wrist (right for Cure Black, left for Cure White). The strap is pale pink while the base is white and dark pink. A purple section rests in the middle with a large white gem heart on a heart-shaped base, Black's is hot pink while White's is sky blue. Surrounding the center are two silver platelets, one adorned with dark grey stars, the other has an ornate design surrounded by two small blue stars.

Both Cures looking at their own bracelets 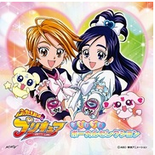 Rainbow Bracelets on the CD cover