The Pretty Cures Have Shrunk~!?

After another one of Majorina's items get loose into their world the girls suddenly find themselves shrunken and surrounded by insects, but Nao is terrified of them!

On their way home from school, Yayoi shows the others a pill bug she had found in the bushes. Nao, who is terrified of insects, hurriedly backs away and trips over a strange mallet. The girls speculate that the mallet could have magical powers, and Miyuki tells Candy the story of "Issun Boushi", in which an inch-high warrior boy becomes large after being hit by a magic mallet. In her excitement, Candy swings the mallet and hits Miyuki in the face, causing all the girls to shrink down to an inch tall.

At Bad End Kingdom, Majorina is once again searching for a lost invention, when she sees Akaoni trying to swat a fly. She asks if he had seen her invention, the "turning ti~ny", and he tells her that he thought it was a fly swatter and had used it on the fly, but threw it away in a rage because it was a bad fly swatter. Majorina then rushes out to the human world to search for her magic mallet.

Having been shrunk, the girls realize that the mallet in Candy's hand has magical shrinking powers. Candy, thinking the girls suddenly disappeared, goes into a panic. Though the girls shout to get Candy's attention, she can't hear their tiny voices. Running around, Candy almost steps on the girls many times.

In the end, she runs off in her search, and the girls give chase to try to catch up with her.

In their chase after Candy, the girls realize that normal, everyday objects now seem like great obstacles to them. A puddle of water is now a lake they have to cross on a leaf boat, a flight of stairs seems like a mountain, the edge of their school desk is like a high cliff, and the gaps between desks a wide canyon. The latter is a challenge for Akane and Nao, who both have a fear of heights. However, despite going through all of these obstacles, the girls just can't catch up with Candy.

Using the umbrella Cure Decor to produce tiny umbrellas, the girls manage to float close to Candy and make themselves heard, but as Candy whirls around, a gust of wind blows the girls into the grasses.

Among the forest-like grass, the girls find many different insects, causing Nao to go into a panic and forcing her to admit her fear of insects. While running away from the bugs and the spider, Nao climbs a flower stalk and slips, falling to the ground, but her fall is broken by a group of pill bugs. With too much shock, Nao faints.

When she comes to, she is lying on a bed of leaves, and a baby pill bug comes to offer her leaves. Miyuki exclaims that the pill bug was worried about Nao too, causing Nao to realize that insects have feelings too. As the other girls play around with the bugs, Reika introduces Nao to the insects' world, making her see the bugs in a different light.

Majorina visits the police station to report her lost invention, meeting up with the same police officer again. Just then, she spots Candy running past with the magic mallet, and gives chase to the school grounds. While trying to catch Candy, Majorina spots the shrunken girls, and seeing how powerless they are, she takes the chance to create a Bad End space. Around the girls, the insects' happiness is all stolen, and the girls transform to Pretty Cure to fight.

Majorina creates a tiny flower Akanbe to battle the Cures. As they battle, the Akanbe fires pollen missiles at the girls, causing damage to the surrounding plants and the insects' home. Seeing the other Cures doing their best to protect the insects, March remembers the kindness of the baby pill bug and is determined to fight for the insects as well. Working together, the Cures deflect the pollen missiles back at the Akanbe, while Happy and Sunny blast an empty drink can at the Akanbe, stunning it temporarily and allowing March to purify it with March Shoot. The Cures then earn their eleventh Cure Decor, the Lipstick Decor.

With the Akanbe defeated, Majorina is throwing a fit at her loss when she realizes that she could still defeat the tiny Cures. Snatching the magic mallet from Candy, she tries to hit the Cures with it, but the magic reverts them back to their original size. Realizing she has lost, Majorina disappears.

After the girls de-transform, Candy talks to the insects and tells the girls they're saying "thank you" for saving them. With this, the girls hope that Nao is cured of her fear of insects, but when a ladybug lands on her nose, Nao finds that she hasn't yet gotten over her fear at all.

Reika uses an umbrella to fly through the sky

Nao is afraid to admit her fear of bugs

The girls on a leaf boat

The girls form a human ladder
Shocked girls.jpg
Miyuki and Yayoi shocked by a rumble

Akane and Nao terrified of heights
Smpc11-13.jpg
The umbrella Decor's power
Emily about to lose her umbrella.jpg
Miyuki accidentally letting go of her umbrella

Nao points at something

Nao trapped in a spider web

Nao has another panic attack

Nao tries to run away

A ladybug lands on Nao's nose

Sunny holds the can above her head 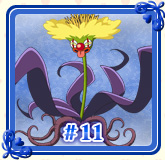 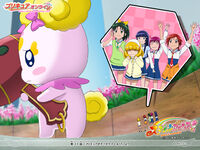