Lies? Truth? I'm not afraid of ghosts! (ウソ？ホント？おばけなんかこわくない！, Uso? Honto? Obake nanka kowakunai!?) is the twenty-eighth episode of Smile Pretty Cure!. In this episode, the girls explore some rumors of strange sightings in their school.

They transformed to Princess Form and defeated the Super Akanbe and retrieved four new decors. After Majorina retreated, the girls walked back home and talked about their experience. Reika reminded them of their summer home works and tuition which Miyuki claimed it is more scarier than ghosts... 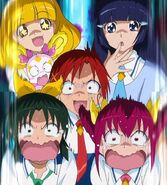 Some of this episodes Akanbes.
Wall smile 28 1 s1.jpg
Smile Precure! Episode 28 wallpaper
Add a photo to this gallery

Retrieved from "https://prettycure.fandom.com/wiki/SmPC28?oldid=69862"
Community content is available under CC-BY-SA unless otherwise noted.