Big Mismatch in a Picture Book!

The movie was first announced during the end of Pretty Cure All Stars New Stage: Mirai no Tomodachi with an unnamed title and a confirmed release date. In the August issue of girls magazine Nakayoshi, the film's official title is revealed alongside Cure Happy's mysterious new form similar to the revealed Princess Form and a new character that will play a role in the movie. Later on after the leak, Toei listed the film on their official website.[2] Official 30 second, and one minute commercials promoting the movie has been aired.[3]

The story starts in the past. As a young Miyuki is seen playing in the playground and finds a picture book with the ending pages torn out. The scene changes to her reading aloud to herself in the library, where she tries to smile and finally she make friends. Afterwards, she promises to the book to continue the story.

In the present day, Miyuki and the other Smile Pretty Cures are at the World Picture Book Exposition having fun and enjoying themselves, unaware that a shadow had been following them. Soon enough, they find the small theater called "The Big Adventure in a Picture Book." Akane suggests a 3D movie, but Miyuki and Yayoi reject the idea, as the cures head inside. The movie shows a girl being chased by the two demons: Gingaku and Kinkaku from Journey from the West, who find her hiding. Running away, the girl finally shows her face and jumped out from the screen, being caught by Miyuki. However, the demons follow her as well; kidnapping her and causing the Cures to fight them. After retrieving the girl, she introduces herself as Nico, and after being requested by the others, she send herself and the Cures to the Fairy Tale World which looks like Märchenland.

Once they arrive, Nico reveals that the Cures can become any character from a picture book, which they gladly accept. She then sends them off, seaming happy that she could please her guests. However, once no one is around, she says to herself, "You liar."

As they split into different dimensions, the Pretty Cures have given to their main character roles at each stories, there are: Cinderella (Miyuki), One-Inch Boy (Akane), Sun Wukong (Yayoi), Taro Urashima (Nao) and Momotaro (Reika). After seeing the real main characters of their stories, the five are suddenly confused, wondering why the stories are mixed up: Miyuki meets Momotaro, Reika meets Urashima Taro, Nao meets Sun Wukong, Yayoi meets One-Inch Boy, and Akane meets Cinderella.

Nico snaps her fingers in order to possess the five fairy tale characters, turning them into the Demon King's minions and the Cures end up being chased (and Reika letting her hair down by force). They eventually meet up and are protected by the villains from the original stories from Cinderella's punch. The evil-controlled characters then mentioned that there would be no happy or bad endings for any story - no ending at all, shocking the others. Soon, Candy and Miyuki realize that the real Momotaro has been controlled by the shadow, and they transform and try to release the shadow from the real characters. However, Cure Sunny retains her small form, but thanks to the help of One-Inch Boy's mallet, the giant Cinderella and the small Cure Sunny reverted back to normal. The shadow then comes out of Cinderella, but the other four characters remained to be possessed.

Suddenly, Nico claps to get everyone's attention and shows her true feelings to Cure Happy, shocking her as she remembers her forgotten past. Nico teleports away by being hugged by unknown shadow, and the villain character in the story throws the Pretty Cure in order to follow her. After landing in a fairy tale town, Cure Happy tells the story about the book involving Nico in it:

"Like her name, Nico is a girl who is always smiling. The animals who didn't get along with each other... became friends with Nico's smile. And one day, the Demon King who hated smiles took Nico away. The smiles disappeared from the animals' faces and they continued to fight with each other. And then, Nico was trapped inside the Demon Castle."

Peace then asked about what would happen to Nico, but Happy replied that the story's continuation was interrupted because the pages were torn out and it never ended. Another flashback shows that Happy was thinking about drawing the rest of the torn out pages, but gave up when she thought her drawings were never good enough. Thus, Happy believes that everything was her fault. However, Sunny forces a smile on Happy's face, telling her that if she didn't smile, her happiness would run away. With the others' encouragement, Happy decides she wants to go to the Demon King Castle and apologize to Nico. At the other side, the Demon King does the same thing to Nico in order to show her true feelings.

When the Smile Cures reached the castle's main entrance, Nico responds negatively on Happy's apology, and stomps her feet to summon the beaten villains and the evil-controlled characters to fight the Pretty Cures. The girl end up get beaten, and Nico tries to convince the girl that Miyuki is the cause of all their pain, and that they should hate her. The other Cures decline, saying that they love Miyuki and her smile. Finally, Happy was able to get to Nico and reveal her true feelings. After apologizing again and hugging Nico, she finally accepts her apology. But this causes the Demon King's dismay and he traps Nico into the cage and absorbs the shadow controlling the main characters into him.

While the Cures fight monsters, the villain characters (with Candy on one of their shoulders) try to release Nico from her cage, saying that she should embrace all of her true feeling, causing the torn out pages to shine. The cage then disappears, and once getting back on the ground, the pages are restored, much to the Demon King's dismay again. The Cures decide to use the Royal Rainbow Burst, but the Demon King fights back, and destroys the attack. With the Cures unconscious, the Demon King also destroys the Fairy Tale World, turning it into a wasteland-like place.

Nico tries to persuade Demon King but to no effect, causing him to throw an attack at her. Once the attack doesn't hit her, Nico is confused, until she realizes that Princess Happy sacrificed herself in order to protect her. Killed by the Demon King's strike, Nico wants the audience watching the movie (which is us) to raise their Miracle Wing Lights to give power to Miyuki, giving the island a pink glow and transform Princess Happy into Ultra Cure Happy.

Ultra Cure Happy uses her power to defeat a dark-magic ball created by the Demon King, giving the flower field to all the surrounding grounds. Then she introduces herself as "Full of smiles, the light of love, Ultra Cure Happy!" (笑顔の包む愛の光, ウルトラキュアハッピー Egao no tsutsumu ai no hikari. Urutora Kyua Happī!). The other Cures wake up, join up with Ultra Happy and Nico, and agree that they should try to purify the Demon King. With other Princess Forms' power wrapping the Demon King with angel wings, Ultra Happy is able to persuade him and purifies the Demon King into his true form with a hug and a smile.

Afterwards Nico shows that she wants the world full of smiles, including the Demon King, and apologizes to messing up the stories while resolving to make the ending of her story herself. Moreover, she says that despite what she claimed earlier, Nico truly loves Miyuki. This makes Miyuki to cry happily and the movie ends with the Nico's storybook creates a wing Cure Decor.

Yayoi flying with cloud in the trailer of the movie.

Akane and Nao riding with turtle and fish in sea in the trailer of the movie..

Little Miyuki watching fairytale book in the trailer of the movie.

March and Beauty performing an double attack in the trailer of the movie.

New villains of the Movie, seen first time in the trailer of the movie.

Miyuki as Cinderella in the movie

Akane as One-Inch Boy in the movie

Yayoi as Sun Wukong in the movie

Nao as Urashima Taro in the movie

Reika as Momotaro in the movie

The Villains of the Fairy Tales helping

The Villain of the Movie Demon King

Princess Cures in the movie

Merchandise for the movie

Free gift from the movie. 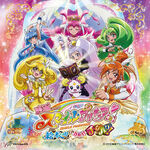 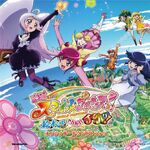