"Draw it into the universe! My own imagination!"

The series' themes are space, astrology and imagination. The aesthetic is based on the "retro" charm of the 80s. The Pretty Cure group adventures through space, meeting various worlds and characters.

Star☆Twinkle Pretty Cure was first trademarked on October 23rd, 2018, and was then made public in a magazine on November 26th, 2018. On November 29th, 2018, the teaser website launched.

I'm Hoshina Hikaru, a second year middle school student who loves space and constellations!
While observing the starry sky to draw a constellation in my notepad, a mysterious creature known as "Fuwa" warped before my eyes!

And then, a rocket fell from the sky, which had the aliens "Lala" and "Prunce" come with it!
...You guys, are actually aliens!? Twincool~☆

Faraway from Earth is a planet called "Starry Sky World" and in the center of it is a holy ground called "Star Palace", which contains the "12 Star Princesses of Constellations" who protect the balance of the whole universe...
But one day, someone attacked and the princesses turned themselves into "12 Princess Star Color Pens" and scattered themselves across the universe!
If this situation continues, the stars will disappear, meaning Earth and the whole universe will be swallowed by darkness...!

"When the star's light are lost, the legendary warriors Pretty Cure will rise together with the Twinkle Book in hand to regain the brilliance again."
Lala says she is searching for the Pretty Cure along with Fuwa in hope that the legend the princesses conveyed will make the universe go back to how it was before.

But then a Notraider who wishes to control the universe appeared and attacked Fuwa...
When I thought "I want to save Fuwa!", my strong emotions made the Twinkle Book create a "Star Color Pendant" and a "Transformation Star Color Pen" which, transformed me into a Pretty Cure!?

Now I have to collect the scattered Princess Star Color Pens and have Fuwa grow up which is the key to the Princesses' resurrection!
Alright, let's leave Earth and jump into space~☆

Hoshina Hikaru (星奈ひかる, Hoshina Hikaru?) / Cure Star (キュアスター, Cure Star?)
Hikaru is an imaginative and curious second year student who loves constellations and space. She can be rather stubborn to which she will investigate anything that interests her thoroughly and acts on intuition. Her catchphrase is "Twincool~☆" and transforms into the Pretty Cure of Stars, Cure Star.

Hagoromo Lala (羽衣ララ, Hagoromo Lala?) / Cure Milky (キュアミルキー, Cure Milky?)
Lala is an alien from Saman who is treated more like an adult. When searching for the legendary warriors, Pretty Cure with Fuwa and Prunce, she ends up on Earth thanks to Fuwa's powers. She's serious with a strong sense of responsibility but sometimes makes mistakes. Her charm point is the antennae on her head and transforms into the Pretty Cure of the Milky Way, Cure Milky.

Amamiya Elena (天宮えれな, Amamiya Elena?) / Cure Soleil (キュアソレイユ, Cure Soleil?)
Elena is a third year student with a radiant smile. She's very popular to the point that she is known as "The Sun of Mihoshi Town". Her family owns a flower shop in the shopping district known as "Sonrisa", where she sometimes works. She often looks after her 6 younger siblings when her parents are off working at the store and transforms into the Pretty Cure of the Sun, Cure Soleil.

Kaguya Madoka (香久矢まどか, Kaguya Madoka?) / Cure Selene (キュアセレーネ, Cure Selene?)
Madoka is a third year student who is very polite and always trying her best. She is from a family with a storied history; her father works in the government while her mother is world famous pianist. She herself holds national championship titles in piano and archery. She also does flower arrangements and tea ceremonies, and gets excellent grades. As the student council president, she's known as "The Moon of Mihoshi Town" and transforms into the Pretty Cure of the Moon, Cure Selene.

Yuni (ユニ, Yuni?) / Blue Cat (ブルーキャット, Blue Cat?) / Cure Cosmo (キュアコスモ, Cure Cosmo?)
Yuni is a resident of Planet Rainbow who took on various aliases to try and restore her planet. She was a space idol named Mao, a space phantom thief, Blue Cat, and Bakenyan, all to find out how to save her people and steal back the treasures that were sold away. She transforms into the Pretty Cure of Space, Cure Cosmo.

Fuwa (フワ, Fuwa?)
A fluffy universe fairy created by the Star Princesses as the last hope. While young and innocent like a baby, she has a mysterious power to release the sealed Star Princesses and open warp holes. Although still enigmatic, her existence plays an importance in which she holds the key to the Princesses resurrection. She lives with Hikaru and resides inside the Twinkle book.

Prunce (プルンス, Prunce?)
An alien from PuruPuru who once served the Star Princesses in the Star Palace. While protecting Fuwa, he looked for the legendary Pretty Cure that holds the key to their resurrection. His special skill is to deform freely.

Garuouga (ガルオウガ, Garuouga?)
The second in command of the Notraiders whose motif is based on the Oni. He has been shown to use his bracelet that can activate the green jewel in his lair to power up the generals.

Kappard (カッパード, Kappard?)
The first general introduced whose motif is based on the kappa. He wields a double-bladed laser sword.

Tenjo (テンジョウ, Tenjo?)
The second general introduced whose motif is based on the karasu-tengu. She wields a fan and appears to be more strategic in mobilizing her fleet of Nottorei.

Bakenyan (バケニャーン, Bakenyan?)
He is Aiwarn's butler whose motif is based on the Bakeneko. He has currently not been seen engaging in battles with the Cures, but has instead been seen overseeing Aiwarn's battles. He is later revealed to be just one of Blue Cat's disguises so she could infiltrate the Notraiders after Aiwarn turned her people to stone.

Nottorei (ノットレイ, Nottorei?)
Footsoldiers summoned to assist a general in attacking the Cures. Each Notraider has their own fleet of them.

Star Princesses (スタープリンセス, Star Princesses?)
The 12 princesses who protect the balance of the universe. They reside within the Princess Star Color Pens after using up their powers to protect the planet of Saman and the Cures have to find and resurrect them all. Each one represents a zodiac sign.

Official logo of the series 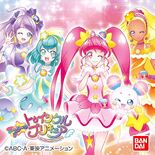 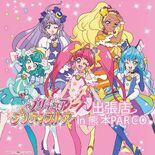 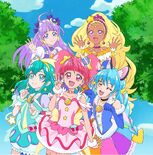 Visual of the five Cures

The Cures as adults

The Cures' profile from Miracle Universe

The Cures' profile from Miracle Leap

First look at the Twinkle Style