The album has a total of 9 tracks, with a special version of the opening sung by the Cures themselves. 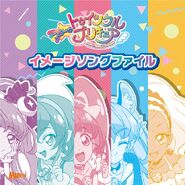 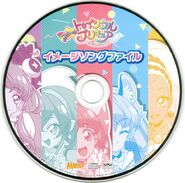 Lyrics
(Bonus songs)
Add a photo to this gallery

Retrieved from "https://prettycure.fandom.com/wiki/Star%E2%98%86Twinkle_Pretty_Cure_Image_Song_File?oldid=404493"
Community content is available under CC-BY-SA unless otherwise noted.