The Sweets Kingdom was built on a large meadow with some round hills. On top of one of these hills, the royal castle and some towns are built. The royal castle is the home of King Waffle, Tarte's father, and Azukina. Furhter places that were shown in episode 32, was the small town were the elder resides. 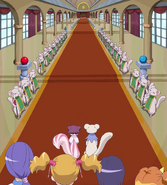 The Elder's house
Add a photo to this gallery

During the Kingdom's first debut in episode one, the one spot shown by Tiramisu was the legendary shrine of the Pretty Cures, where the Pickruns have dwelled until the legendary power was needed to stop Labyrinth. This Pretty Cure shrine is located within the Mushy Bean Woods, which was haunted by the evil Mochi Spirit. 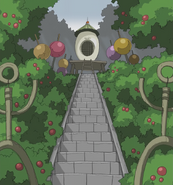 The path leading to the Pretty Cure shrine

The Mochi Spirit's shrine
Add a photo to this gallery

Retrieved from "https://prettycure.fandom.com/wiki/Sweets_Kingdom?oldid=488687"
Community content is available under CC-BY-SA unless otherwise noted.