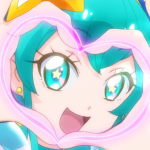 Hello! My name is CureLightning, a 17 year old girl who loves anime. Pretty Cure was the first anime I watched and finished so its very precious to me. I'm not as active as I used to be put I plan to work on that~! Eventually.... guess I'm a lazy mod XD

Have some Milky's while I revise my page lol

I'm sorry if I offended anyone's favorite Cures. This is my opinion so you can have yours and I can have mine.

I'm sure everyone has their preference of Pretty Cure seasons. Here are my top 5 favorites. I will mention the seasons that aren't on the the top 5 just because, why not?

5. Heartcatch Pretty Cure: Ah, the fan favorite. I really enjoyed Heartcatch with its great story, unique characters, artstyle (Ojamajo Doremi all the way!) but it wasn't perfect. Cure Moonlight is a good character but she was just so depressing that it was irritating! When is she ever happy? I understand that she lost a lot of things but she needs to get over it eventually! Regardless of that, its easily one of the better seasons of Pretty Cure.

4. Smile Pretty Cure: This one didn't have a super big plot but the character development in this season is so well done that I managed to enjoy it! I don't like Glitter force though, it didn't do its original version justice. Did I mention that Smile has my favorite Pretty Cure artstyle?

3. Futari Wa Pretty Cure Splash Star: This one is super underrated. Why do people not like it because of their outfits? I know the outfits are a bit strange but once you get used to them, you will enjoy this show.I really like the nature theme and the characters are all pretty great. I need to rewatch this one at some point.

2. Suite Pretty Cure: This was one of the seasons I REALLY wanted to watch when I became a fan of Pretty Cure. I absolutely LOVE music so this show was enjoyable for me. It was funny, the characters are amazing, and the OST is probably my favorite thing. Also, Hibiki and Kanade remind me of how me and one of my closest friends are IRL. I really wish there were more fans out there. At least CureHibiki is a Suite fan as well. ^^ If you're a Suite fan, message me if you would like.

Here are my thoughts on the other seasons...

Futari Wa: Good for a beginning series in a franchise. It was actually the first Pretty Cure I watched back in 2014. It has its flaws but it is pretty good.

Max Heart: Not bad for a sequel (the fight scenes were awesome) but there were some things I would change... *coughs* Shiny Luminous.

Yes!: I actually liked this one a lot. It is one of the seasons to really change up Pretty Cure and it was just so much fun to watch. I think its actually better than the sequel.

5 Go Go: I was kinda disappointed with this one. I mean, it does fine with expanding on the characters but I can't figure out where it fits in the Yes! timeline. The girls don't even move up a grade in school! Milky Rose wasn't that good either (see least favorites section).

Fresh: I liked this one a lot too. It started out a bit slow, but managed to pick up and become a good season. I love Setsuna's redemption arc and it has a different feel to it than other seasons. Also, the fight scenes and villains were awesome!

Doki Doki: Umm, I didn't really like this one that much. The story was decent even if it had some problems but most of the characters weren't very good. Of course there are some exceptions (Diamond, Rosetta, Sword, Regina) but I was disappointed in the end.

Happiness Charge: I admit that I used to hate this season, but I rewatched it and now I LOVE IT! It's messy sure, but its so much fun! Please give it a chance

Mahou Tsukai: This one had good ideas and concepts,but its a disaster. No character development? No story? What happened Toei? I thought this was going to be great, but its a letdown.

KiraKira: Well... it’s flawed and Ichika is kinda annoying but I love this season. It’s so cute x3 the music and other main characters are what make the show enjoyable for me. I‘m sad to see it go to be honest, but all good things come to an end.

HuGtto: I liked it but at the same time, it had so many things that could've been better.... maybe I'll go into detail but idk

Star Twinkle: I love it so far! That 80s neon space aesthetic is my life and its just so entertaining! Also it has great music and Milky~!

Retrieved from "https://prettycure.fandom.com/wiki/User:CureLightning?oldid=367767"
Community content is available under CC-BY-SA unless otherwise noted.