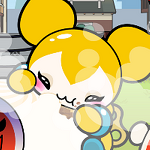 Honestly this user page needs a ton of reworking, and I'm not really into Pretty Cure as much as say, in 2015. I'm very much into Love Live! and BanG Dream! series and a huge fan, but I still have favorites ^^;

My absolute favorite season has to be Heartcatch Pretty Cure! I guess I'm more of a fan of the darker concepts, and it's a really nice season with a ton of redemption, but also a ton of depression and coping with negative emotions. It's just super powerful and a strong metaphor in life.

Now let's be honest here about characters...of the All Stars Cures, Cure Mermaid wins in that department :') Not only have I always loved mermaids since I was a child, but a Cure that represents a princess of the sea + has a beautiful aura and personality?! Count me in!

But no, Minami isn't my favorite character. Do you *REALLY* want to know my favorite of all time? Are you sure? I hope this doesn't embarrass you or anything...because honestly I'm prepared to be the only person here whose favorite character is a minor character; on a group page but my anime "waifu" and favorite Pretty Cure universe character has to be...

One of the first Pretty Cure characters I was introduced to, ironically enough, destiny was smiling on us two when I first saw her in the show and the only time I'd ever see her in Heartcatch buuuuut I just fell in love. Not entirely sure if it's her style or the representation of sadness/failure here, but she has somewhat influenced me to hang on in life, especially after Yuri's aftermath statements. I love you so much, darling, and thank you just for being there ;; v ;;

Okay I gush a ton about her I think...? Maybe I'll update this sooner :thinking:

Retrieved from "https://prettycure.fandom.com/wiki/User:Cure_Alumi?oldid=385699"
Community content is available under CC-BY-SA unless otherwise noted.