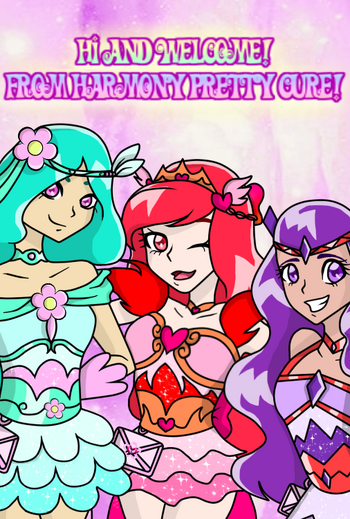 Welcome to ⚜My Favorite Wikias⚜

This section is where you can find me on the internet and Wikia pages.

I officially started following the Pretty Cure franchise in 2016 and, so far, I’m really impressed with the series. I mean, sure, there are a few season that lack certain things to make them more enjoyable than the others, but overall, none of them seem too bad to me like some shows can do. I will probably write too much, by the way, and there will be spoilers, if you’re fairly new and didn’t watch some of the seasons listed below, so be warned!~
“There is nothing inherently weak about what society deems as feminine. Pretty Cure is not lesser for enjoying or drawing power from these things. They don’t have to act masculine to be heroic. And now if you’ll excuse them, Pretty Cures are gonna save the universe with their sparkly power of rainbow and love. Got a problem?”

Heartcatch Pretty Cure! is, at least in my opinion, one of the best, if not the best, Pretty Cure season. From the character development to the very core of the story. Let’s begin with the motifs, shall we? The whole season about “Language of Flowers” has really gotten me and I view it as a beautiful addition to the series. Talk about humans feelings and souls represented in flowers and their language really got through me. The plot was truly great and very different than any other season in the whole Pretty Cure franchise, interesting and a bit sad as well. The art style was unique and I find it suitable for the season, but I didn't like their very long legs. Fits with the Heartcatch’s funny side and also can convey all the feelings from the episode to the viewer. What I liked the most about it are the fight scenes, because Pretty Cures are magical girls iconic of their fist fights. Also, brilliant idea to make Pretty Cure roles like a legacy! Character development was just truly amazing and no matter how much Yuri’s backstory was depressing, it shows through much she has been through and what she's ready to overcome. Erika, even in the shadow of her big sister, stayed positive and determined, but we also could see the downfalls of it, showing that Erika’s nor perfect but she tries to be a great person. Itsuki was loyal to her family and has self-sacrificing personality, as she was ready to abandon her interests and hobbies to help her family. And the last, but not least, Tsubomi. My favorite Pretty Cure and the best leader, in my opinion. Tsubomi was shy and introverted flower-lover, but decided to become a person who’ll be able to help anyone in need, with the help of her family and friends, and at the end of Heartcatch, she was on the right way to success. Mascots were truly cute and adorable, and who wouldn’t love them, when Heart Seeds literally come out of their back? I told you, a masterpiece. Some of the minor characters had great stories also. The ending was truly perfect in my opinion and wouldn’t change it at all. All Cures fusing into a giant Infinity Silhouette, represents true teamwork, and not only a Lead Cure steals all the spotlight. Heartcatch got me into Pretty Cure franchise, so it is one of the things why I’m obsessed with this season, but has a minor role.

Go! Princess Pretty Cure is my second favorite season mostly because of season’s motifs and plot that I adored. About motifs. The whole season being around to believe in dreams no matter how irrational they sound is truly amazing and I love it. And the way that Toei decided to manifest it throughout the princesses is a genius! Telling little girls that being a princess is not wrong and they're not weak to encourage them is great. The message of princesses being strong, kind and beautiful and that there is nothing wrong about it amazes me. Plot was rather clear and I didn’t have moments where I would go “Excuse me?”, which is a good sign. Art style. I like it, faces were pretty shown and greatly colored. But, my disappointments were battle scenes where Cures looked so buff I would cringe and anatomy, with just too long legs. Characters were truly good, but had similarities with the previous ones like, we have HaruHaru, my favorite Cure in Go! Princess, who’s clumsy and likes food(on what she really resembles Nozomi), but has her dream and decides to follow it no matter what. Minami, an elegant "Academy’s Princess" who everyone admires and thinks she’s perfect. Kirara, the popular model who at first refused to be part of Pretty Cures and Towa, previous Twilight and Pretty Cures’ enemy, revealed not to be related to Dyspear, but rather princess of Hope Kingdom and Kanata’s little sister. Pafu and Aroma were one of the best mascots in the franchise and I’m glad they got their human forms. Also, really liked their transformation items, Dress Up Keys, as I found them cute and very original. However, the ending broke me and made a river out of tears, as seeing Cures getting apart and might never seeing each other or ever be close as they were, the endings I hate the most. But we see that girls made their dreams come true, which is what matters the most.

Tsubomi is my favorite legendary warrior and Lead Pretty Cure overall. Trying to change from shy and introverted to strong and kind is not easy, I never found myself in situation like that, but I know that it is hard to change, and that will is not enough. She's also very different from all the other Pretty Cure Leaders, as well. Tsubomi was first Lead Cure to be excellent in academics, but she's also the first one being shy and introverted, and the first Pretty Cure that decided to change that fact. I also like how in the beginning of the series, she's considered the weakest Pretty Cure in Pretty Cure history, while at the very end, she, along with her friends, the strongest Pretty Cure. It was really touchy, in my opinion.

At first sight, I thought of Towa as a copy of Setsuna’s story. Both with same theme color, very similar background and the fact that both were Pretty Cures that appeared later in the season. After some time, Towa gained her own personality and somehow, convinced me that she's not pure copy of Setsuna. Yes, I do somehow think that Go! Princess and Fresh do have similarities as Pretty Cure seasons(just as Smile! has with Yes! 5 GoGo! and Happiness Charge with Heartcatch), mostly because of having three Pretty Cures(pink, blue and yellow) as everyday Cures and then in the middle of season villain becomes the Cure(red). However, in Fresh red Cure was planned, while in Go! Princess, she was not. However, with Towa's personality and background mixed with her awesome attacks and being princess of my favorite element, I can proudly say that she's my second favorite Pretty Cure!

Retrieved from "https://prettycure.fandom.com/wiki/User:MagdalenaFeos?oldid=328014"
Community content is available under CC-BY-SA unless otherwise noted.