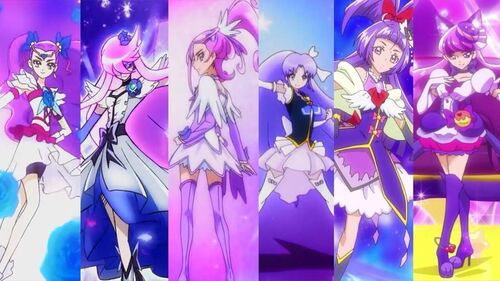 If anyone claimed that magical girls can't be cool, they clearly have not met some of these Cures. (Or Homura Akemi.......or Sailor Santurn.....or Mew Zakuro....). Purple Cures are generally portrayed to be cool, calm, and stoic individuals that normally sport a sense nobility or luxury. Because of this, they tend to have a large crowd idolizing them. They are also usually shown to be more efficient and powerful fighters, even more so than the entire team combined, and they often prefer to work/be alone or refuse interact and socialize with most people. This behavior usually ties to their color, which often symbolizes feelings such as gloom, sadness, and frustration. This makes sense since they tend to have a complicated situation or an unfortunate event.

These Cures not as frequent as other colors but sufficient enough to be noticed in the Pretty Cure franchise. But are most of these Cures as cool and reverenced as they are depicted? The following analysis will focus on these violet-hued fighters.

Retrieved from "https://prettycure.fandom.com/wiki/User_blog:Dino_Ranger_Black/Analysis_and_Review_of_Purple_Cures_in_Pretty_Cure?oldid=414936"
Community content is available under CC-BY-SA unless otherwise noted.