Yokubaru (ヨクバール, Yokubaru?) are the main monsters in Mahou Tsukai Pretty Cure!, summoned by the villains of the series. They are created by fusing two or more objects together, and pose formidable enemies under their creator's command. 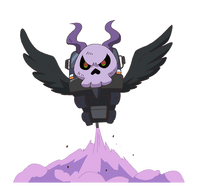 Yokubaru are the first monsters shown in the series, created by the Dark Magicians under the command of Dokurokushe. The first summoners are Batty, Sparda and Gamettsu.

Besides keeping the appearance of the objects used in the fusion, its face is a cartoony grey skull with a pair of horns. Its eyes are green with red pupils and black sclera. They are able to say their names and respond to orders of their creators with "Understood!".

To create the Yokubaru, a specific magic circle is needed. The objects have to be connected to it, while the summoner says the magic words.

The circle has an outer circle of bones, with an inner circle of a snake eating its tail. Three skulls are arranged as a triangle and between them, symbols that remind of the Caduceus, the wand of greek god Hermes that could make the dead come alive. Dokurokushe himself studied dark magic thoroughly and included depictions of the circle in the book he wrote.

The magic circle used in the Yokubaru creation

The larger magic circle when summoning a Super Yokubaru

The skull's eyes flash up purple with dark magic and the magic circle flashes up around the summoner. A gust of wind drags the wanted items towards the circle and a skull of purple fire swallows the items and the Yokubaru merges together.

Initiating the Yokubaru summoning, note how the skull's eyes flash up

The circle appears on the shell

The skull that swallows up the items

He uses bones left from Dokurokushe's dead body as a third ingredient to the fusion, which results in the face being split between a grey skull and a black skull surrounded by a purple aura. Their eyes are also completely red. Additionally, the chest has remains of a rib cage on it, probably because part of Dokuroksuhe is infused in it.

The split motif is apparent in the beginning of the incantation as well, with Yamoh holding it in a way that seperates the screen. The motif also applies on the character of Yamoh himself, as he used to be fused with Dokurokushe's final form and grieves the loss of his boss.

While holding the bone, he says "Magic infused!" (魔法 帰りました！, "Magic infused!"?). He spins the bone and a ghostly purple skull emerges from it. With a flash of the skull's eyes, a big magic circle is produced. Both items get dragged towards the circle. Yamoh closes his eyes and spreads out his arms, and says "Wreathed in his dark magic! Come forth! Yokubaru!" (大いなるの闇の魔法で!いでよ！ヨクバール！, "Wreathed in his dark magic! Come forth! Yokubaru!"?). While finishing the sentence, he abruptly opens his eyes and raises his voice. A normal kind of Yokubaru comes out and the ghostly skull surrounds its face, then explodes as soon as Yamoh finishes the spell. This results in the split face of the Super Yokubaru.

Fusing people or animals with a mind of their own is possible, but painful for the fusioned one and complicated. Yokubaru created from inanimate objects faithfully listen to orders given. A being with a mind is shown to retain memories and can act against the summoner's order.

Sparda tried to use a pegasus as part of the fusion in episode 08, but the pegasus refused to attack her child, making it easier for Pretty Cure to defeat Sparda.

She fuses herself into a Yokubaru in episode 16. The fusion pains Sparda, as her voice becomes very hoarse, she trembles trying to get words out, and takes heavy breaths between words. Batty notes she is unable to control the raw power.

Batty also becomes a Yokubaru in episode 19, fusing with the power of Gamettsu's and Sparda's magic. As he received a ghostly magic skull from Dokurokushe, he is given control over his new power. Yamoh uses fusion into a Yokubaru as a last resort in episode 26, and while stronger, seems slower in movement and speech.

Finally, all members of the Dark Magicians save for Batty are fused together into a giant Yokubaru in episode 45. As their hearts are united in their goal not only with each other, but also with Batty (who directs their movements), they are able to unfold the power of living beings fused together.

Sparda pioneers fusing herself into a Yokubaru

Batty following up, but with Dokurokushe's help